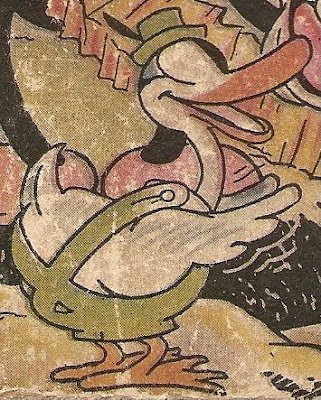 The first Disney publication of 1931 was The Adventures of Mickey Mouse, which appears to have come out around May (it was copyrighted on May 19). Besides being the first-ever Disney book produced for retail (1930's Mickey Mouse Book was largely, if not exclusively, utilized as a promotional give-away), this book also has a great curiosity value in that if features the pseudo-debut of the most popular Disney character, Donald Duck, long before his appearance in the cartoon short Wise Little Hen (1933).
The Donald Duck of The Adventures of Mickey Mouse actually has got what can be called a 'bit part' in this illustrated story book. In the first page of the story, Mickey's "many friends in the old barn" are listed by their names and one of the six names (besides Minnie) listed is "Donald Duck". No duck picture accompanies this page.

Interestingly, all the other characters named together with Donald Duck as Mickey's friends were at the time already frequently appearing as side characters in Mickey Mouse cartoons of the era, but it was only Donald Duck which had not yet appeared in a cartoon prior to the publication of this book. Perhaps some sense can be made out of this seeming anomaly by hypothesizing that there might have existed in the Disney studio what might be a list, however rudimentary, of possible side characters with tentative names to populate the Disney universe.
Or, even a wilder hyphothesis might be that perhaps this "Donald Duck" had already appeared in Mickey cartoons by then?! Look at the Mickey Mouse cartoon The Birthday Party, released in January 1931, that is a only few months before the publication of The Adventures of Mickey Mouse, and you'll see ducks there among the crowd throwing a party at Mickey, alongside the other familiar (and some unfamiliar) side characters... 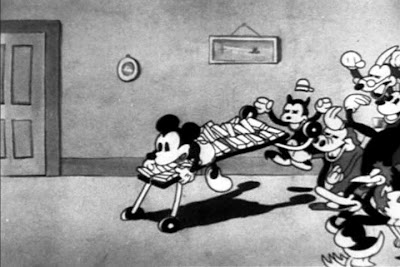 It would not be too farfetched to think that one of the unnamed ducks of the cartoon might be the duck named as Donald in the book. At least this much can be assumed with reasonable safety: the creators of the book almost certainly must have looked at the most recent cartoons to draw upon the supporting cast of their story, and when they did, they saw ducks as well as horses, cows, pigs, et al. Of course, where did the name Donald came from and who named that name might never be known.

Besides the introduction at the first page, Donald Duck is mentioned for the second and last time in the text halfway through story as one of the farm characters who accept Mickey's invitation for a party: 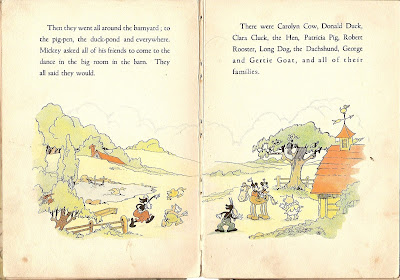 In the illustration, we see two ducks coming out of the pond to meet Mickey and Minnie. However, unlike all the other farm folk, these ducks do not appear to be clothed. Even Horace (by the way, he is named as Henry in this story) who is on his fours is wearing a hat and is hence semi-humanized, but these ducks are not.
A pair of fully clothed ducks do appear on the spread illustration on the reverse of the back cover 'though: 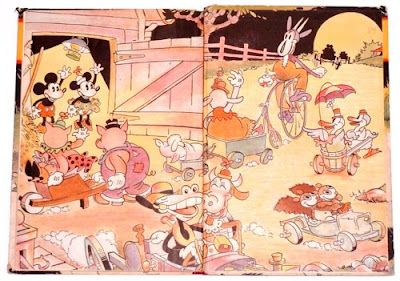 The text reference to farm folk accepting Mickey's invitation had mentioned "their families" as well and hence we have a male and a female duck in this illustration. (Is the female duck a pseudo-debut of Daisy? Well, I will not go into that... ). The back cover features the male duck - obviously Donald Duck of the text- solo: 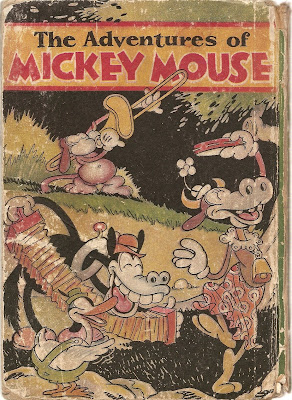 Thanks for sharing these rare images! :)

Hi Joakim, you are welcome; and I thank you for your own wonderful blog which I follow with great interest.

I love those characters above, and the pictures isn't bad enough. I always prefer the classic style in this draws. Thanks so much for share this.