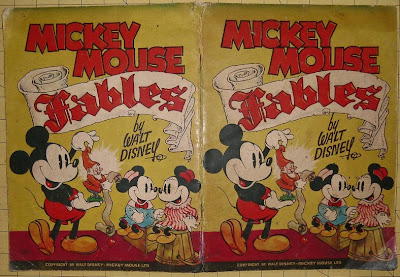 This vintage British Disney book by the Collins Clear Type Press titled Mickey Mouse Fables was recently sold on ebay for the winning bid of 54.5 pounds. The seller estimated its date as "circa 1934", an estimate which is undoubtedly off the mark by several years as the renditions of Donald Duck does not feature the long and narrow beak he sported in its early appearances in 1934 and in the subsequent few years. I would estimate the book to be from the late 1930s. 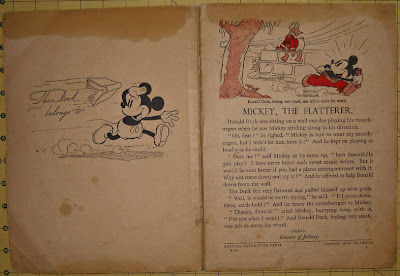 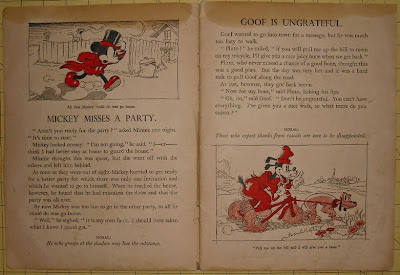 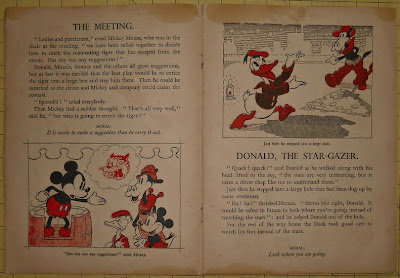 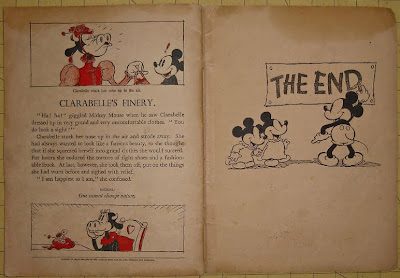 Posted by Kaya Özkaracalar at 06:28 7 comments: 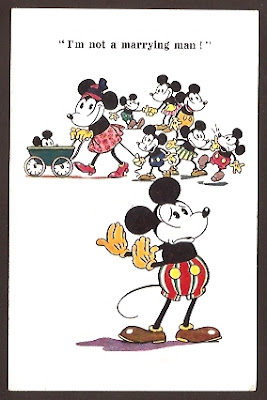 This vintage postcard that I won at a recent ebay auction has just arrived today..
Posted by Kaya Özkaracalar at 12:05 1 comment: 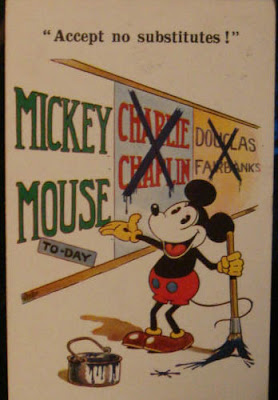 This British Mickey Mouse postcard issued by Inter Card Co. based in "Barnes, S.W." was recently sold on ebay for the winning bid of 31 British pounds (app. 49 US dlrs). The handwritten correspondance and the official postofice stamp on the reverse carries a date from 1931. The same seller sold several other Mickey Mouse postcards from the same era. The below undated Inter Art Co. card, which was sold for the winning bid of 16 pounds, is also interesting as it features a cat in distinctively British police uniform!: 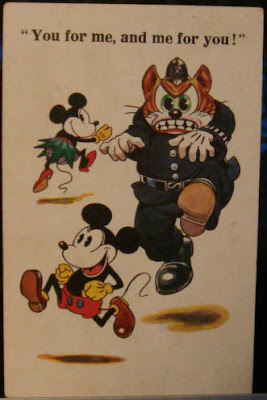 However, as far as I am concerned, a more desirable one was this "Milton Post Card" issued by the London-based Woolstone Bros. which features triple Mickeys, all smoking and one apparently even drinking a liqour!!.. 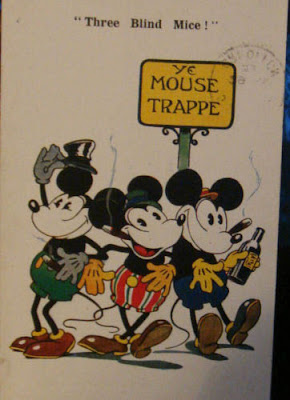 This particular card, whose faded postoffice stamp on the reverse appears to carry a date from 1932, was sold for the winning bid of 10 pounds. Woolstone's "Milton" postcards are probably the earliest Mickey Mouse cards in the world, I'd earlier seen one dated from 1930. I bought one myself and will post a scan when I receive it.
Posted by Kaya Özkaracalar at 10:19 1 comment: 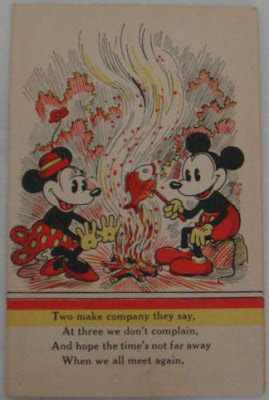 I had very much wanted to buy this British Mickey Mouse postcard from 1935 off ebay, but unfortunately missed bidding for it. It was sold for a winning bid of 10.5 British pounds, an affordable price for such a vintage item with such a nice illustration in my opinion. Several more cards from the same series were also sold by the same seller. The below one fetched the highest bid at 25.8 pounds (app. 41 US dlrs), presumably because it was unused: 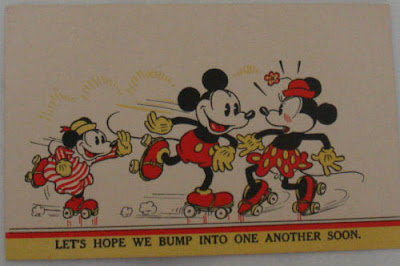 Close behind was this card which fetched 25.3 pounds: 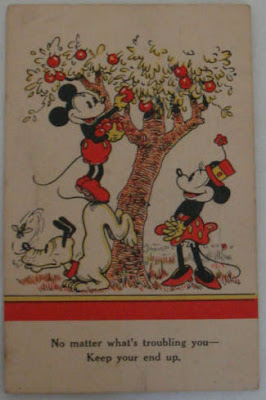 And the below one, which should indeed be considered as highly collectible in my opinion as it features a mega-rare appearance of Patricia Pig, a supporting character from early Mickey Mouse cartoons, was sold for the winning bid of 22 pounds: 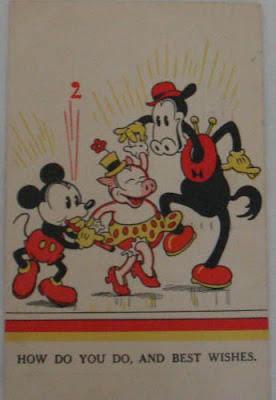 These cards were issued by the London-based H. Delgado Ltd. and carried the "By permission: Walt Disney - Mickey Mouse Ltd." tag. With the exception of the Patricia Pig one, which has been re-drawn from one of the illustrations in the illustrated story book The Adventures of Mickey Mouse (1931), the illustrations are very much in the style of the color plates of British Mickey Mouse Annuals. Those annuals are known to be the work of Wilfred Haughton 'though I am not 100 % certain if it was also Haughton who drew the color plates as well as the interiors; if so, the illustrations on these cards are also probably the work of Haughton. Any opinions are welcome..
Posted by Kaya Özkaracalar at 04:19 1 comment: 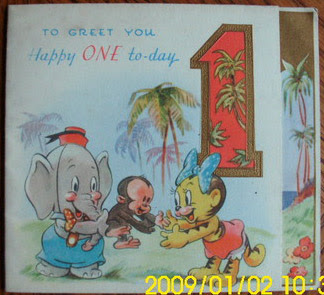 This vintage greeting card featuring Elmer Elephant was recently sold on ebay for a winning bid of 7.25 British pounds (app. 11.5 US dlrs). The UK-based seller gave no info on the publishing company or the date of the card, but it is likely to be from the late 1930s as it depicts a scene from the 1936 Sunday newspaper comics continuity headlining Elmer.
Posted by Kaya Özkaracalar at 02:33 No comments: 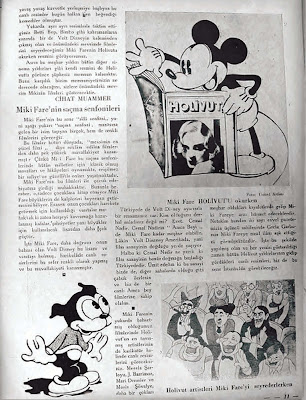 This article from no. 27 (from the year 1934) of Turkish cinema weekly magazine Holivut was kindly brought to my attention by my friend Özge Özyılmaz (*) who came across it while researching old Turkish cinema magazines for her PhD thesis on the coverage of Hollywood in pre-war and war-time Turkish film magazines. The article is apparently about animation in general with one section on p. 11 on Mickey Mouse cartoons which, the article reports, will began to be screened in Istanbul cinemas "in the coming season." Unless the author of the article has unknowingly missed any previous release of MM cartoons in Turkey, this indicates that they made their Turkish debut in 1934, with a six years delay from their inception in the US. I know that MM cartoons were being distributed in Britain as early as 1930, but I cannot find any info on the dates they began to be distributed elsewhere in the world. If anyone can kindly provide any info on the distribution of MM cartoons outside the US, esp. in continental Europe, that will be great. In any case, 1934 is a somewhat curious date for the possible debut of MM cartoons in Turkey as MM strips, possibly reprinted from French albums, had already began to be serialized in Turkish children's magazines as early as 1932 and even Turkish illustrators themselves had made several MM gag panels from that date onwards prior to 1934. And yet, it is also a fact that MM comics and story books did really proliferate in Turkey from 1935 onwards.
By the way, if anyone can point out the original source of the illustration on the upper right corner in which Mickey is reading an issue of Holivut, we will be very grateful.
(*) I also thank Cemil Yıldızcan for converting the pdf file into jpg format so that I could post it in this blog.

Posted by Kaya Özkaracalar at 11:22 No comments: