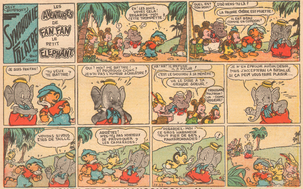 As I have noted in the below post in this blog, the first five 'Silly Symphony' Sunday newspaper strips featuring Elmer Elephant have unfortunately never been reprinted in any English-language edition. However, they had been reprinted in non-English editions in continental Europe. Above scan of the first-ever Sunday strip featuring Elmer is from the no. 86 (dated June 7th, 1936) of the French Le Journal de Mickey and the below ones from no.'s 87-90: 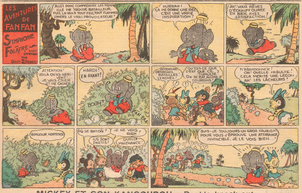 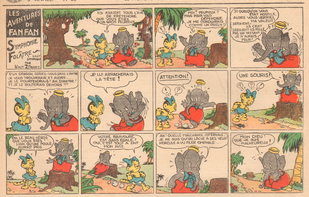 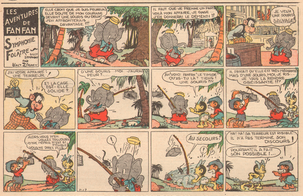 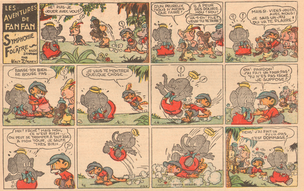 note: scans in this post originate from the outducks archive
Posted by Kaya Özkaracalar at 06:29 No comments: 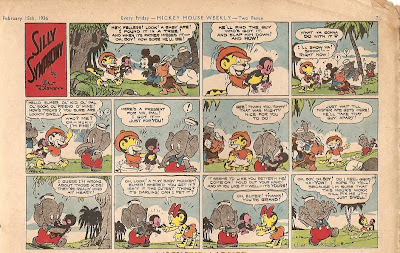 Elmer Elephant was the star of a 1936 cartoon short from the 'Silly Symphony' series. Prior to the release of the cartoon Elmer Elephant, the character actually debutted in the Sunday newspaper comics medium on. The weekly Silly Symphony newspaper strips series featured the exploits of Elmer Elephant for 12 consecutive Sundays from Oct 27th, 1935 onwards till (including) Jan. 12th, 1936. A planned Elmer cartoon sequel would never materialize, but Elmer would re-appear in Silly Symphony strips in 1938-39. While Elmer's second run in the Sunday strips would be reprinted in the US Mickey Mouse Magazine and, decades later, also in a special edition of reprints, his first run from 1935-36 has never been reprinted in the US. The only known English-language appearance of those Elmer Sundays strips outside of newspapers has been in Britain's Mickey Mouse Weekly. Sadly, MMW omitted the first five Elmer Sundays and started its serialization with the 6th one. I am not sure but I think the first five Elmer Sunday strips, of which I have so far been able to see only one (in a Turkish reprint from 1938), might consist of stand-alone gags. The remaining seven, on the other hand, consist of a narrative continuity revolving around a baby ape attached to Elmer. Here is the complete run of Elmer Sunday strips published in MMW, with the above scan from MMW no. 2 (dated Feb. 15th, 1936) and the below ones from no.s 3-8 (MMW no. 1 did not feature any Elmer strip): 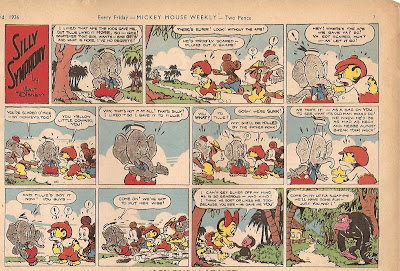 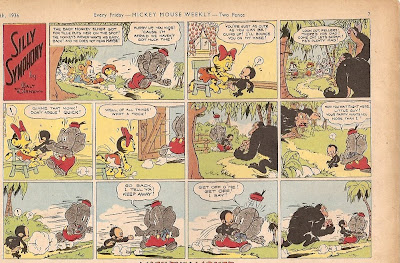 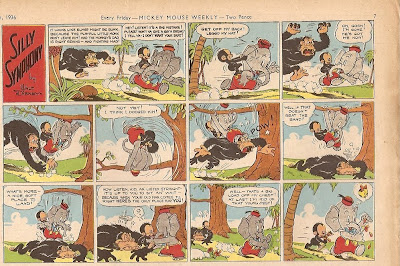 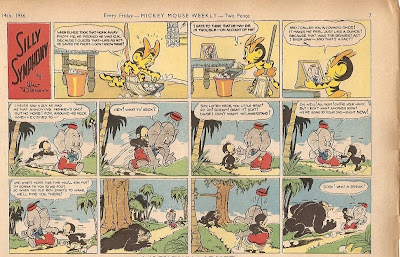 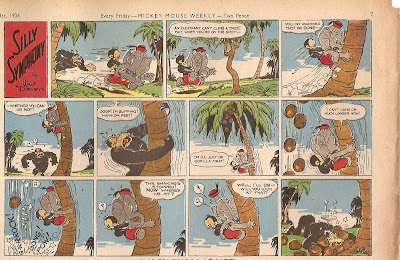 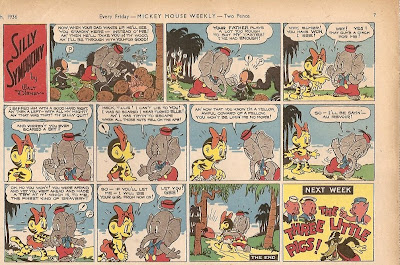 Posted by Kaya Özkaracalar at 13:28 No comments: 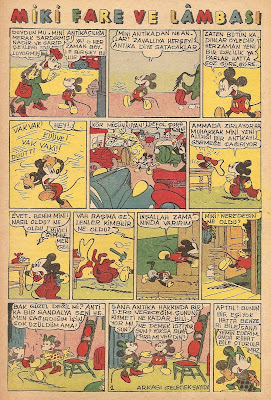 Above scan is from the no. 257 (dated March 29th, 1941) of Turkish weekly children's magazine Yavrutürk, featuring the first installement of 'Miki Fare ve Lambası [Mickey Mouse and His Lamp]' which happens to be the first color edition of a Mickey Mouse strip in Turkey. 'Miki Fare ve Lambası' is an abridged and colorized Turkish edition of a US daily newspaper continuity from 1939-40 known as 'the Miracle Master'. It was serialized in Yavrutürk till (including) no. 286 in a total of 30 parts with one page each issue.
Posted by Kaya Özkaracalar at 02:37 No comments: 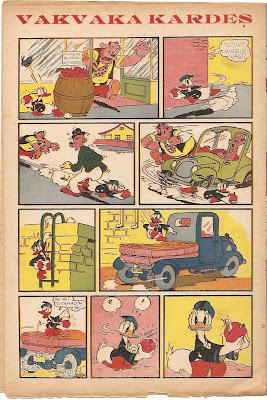 Above scan is of the back cover of no. 206 (dated April 6th, 1940) of Turkish children's weekly magazine Yavrutürk, marking the first color edition of Donald Duck in Turkey. The Turkish edition is missing two panels from the original American Sunday newspaper edition from Jan. 28th, 1940 (below scan from a 1997 reprint): 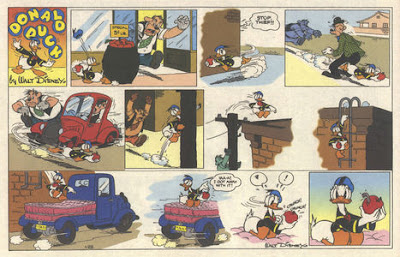 Donald Duck Sunday newspaper comics would be reprinted in color in the back covers of Yavrutürk no.'s 206-212 and no. 216.
Posted by Kaya Özkaracalar at 03:20 No comments:

The above swap card, a giveaway with the Quax "chewie choc" manufactured by the British firm A. J. Caley Ltd of Norwich, was recently sold at ebay for the winning bid of 14.5 pounds. This card in particular is of special interest as it features Donna Duck, the earlier incarnation of Donald's girlfriend Daisy. The below card from the same series had earlier been sold for the winning bid 19 pounds:

In my collection, I have the below card with Elmer the Elephant (one of my favorite Disney characters) which I had bought several years ago:

The Dirty Bill referred to in the dialogue of this card is the villain of the Disney cartoon short Robber Kitten (1935) who was featured in person in card no. 3:

Below are four other cards from the same series, including no. 1 (above left):

Online sellers offering these cards have variously dated them as supposedly being from 1932 (!) to 1937 or 1938. The earlier claim is especially preposterious as many of the characters featured in the cards had not been created by then! The truth is that these cards were issued in July 1939. The merchandise which they would be given away with were first alluded to in the editorial page of no. 180 (dated July 15th, 1939) of Mickey Mouse Weekly: 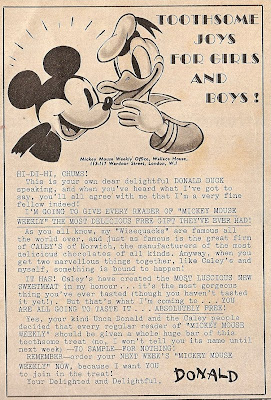 More info was given in the 'Wise Quacks' page of the next issue: 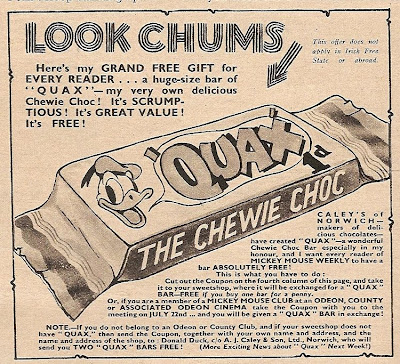 Note that the "free gift" referred here is not the cards, but the chocolate bar itself which would be given to any reader of MMW when they present the below coupon provided in the same page: 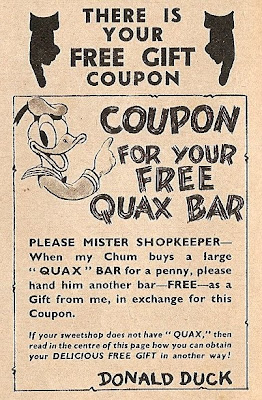 The cards were first mentioned -and highlighted- in no. 182: 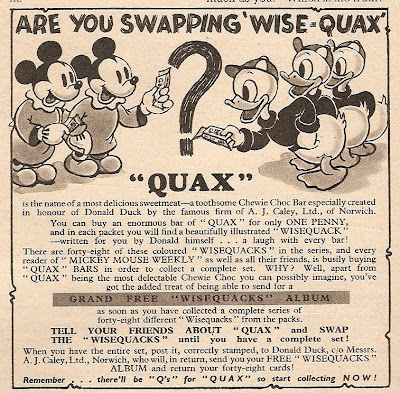 From then onwards, similar promotions of Quax highlighting the enclosed swap cards were published in several subsequent issues of MMW. The illustrations in the above and below (from no. 183) promos are by the British staff of MMW: 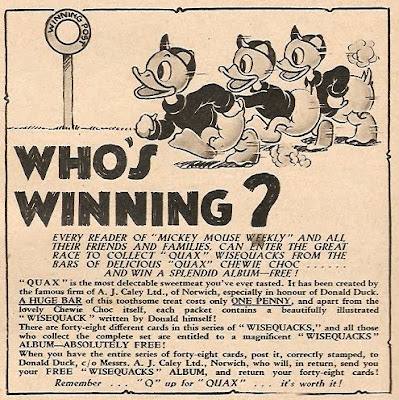 On the other hand, the illustration on the below promo from the next issue is modeled from an illustration from the publicity materials of the Disney cartoon short Donald's Cousin Gus (1939), with the sandwiches in the original material redrawn as Quax bars: 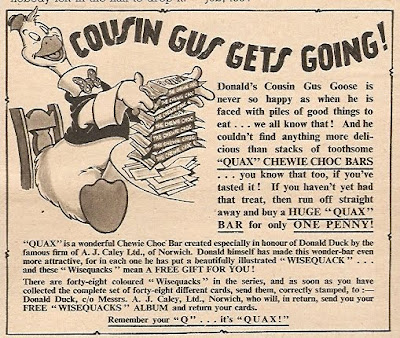 The Donald and Donna illustation in the below promo from no. 185 is again by British artists: 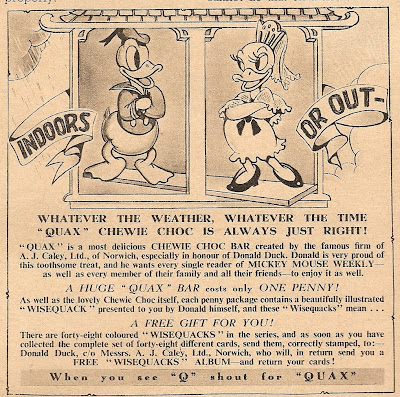 The below promo from the next issue features a clever re-contextualization by juxtapositioning of illustrations derived once again from cartoon publicity materials: 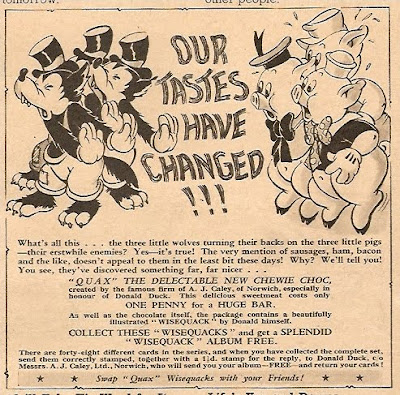 On the other hand, the illustration of the promo from no. 187 appears to me to be of British origin even though the art is more slick than those in earlier ones:

The Donald Duck figure on the left in the below promo from the next issue is very familiar, but I can not immediately recall its original source (if anyone can, please let us know): 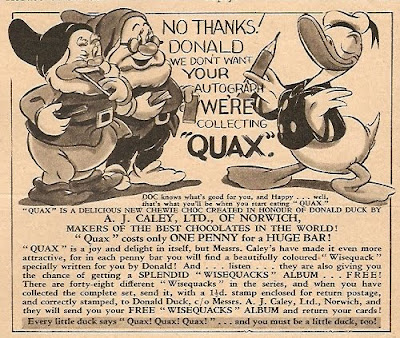 Similarly, I am not sure about the illustration from no. 189, but it is somewhat reminiscent of a scene from the Disney cartoon short Modern Inventions (1937): 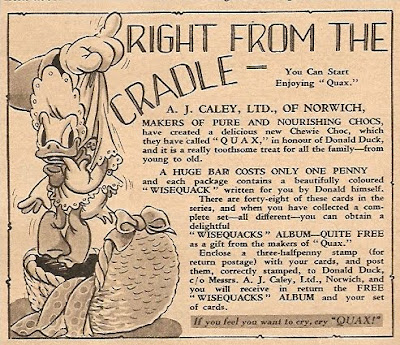 The last illustrated promo for Quax in MMW appeared in no. 190:

The next issue had a promo highlighting the album to be given to those who collect all the 48 cards in the set: 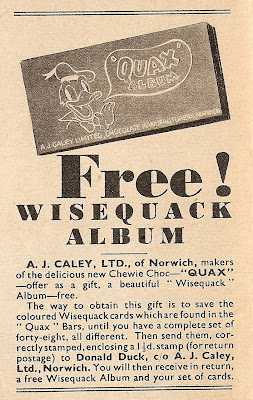 Posted by Kaya Özkaracalar at 16:04 3 comments:

In an earlier post on this blog, I had covered a British-made Disneyic strip about savings efforts during the 2nd World War in Britain's Mickey Mouse magazine. Recently, I've come other samples of the same theme, so these strips constitue a short-lived series. The above scan (broken into two due to the limited size of my scanner) is from no. 309, dated May 9th, 1942.
Posted by Kaya Özkaracalar at 13:59 No comments: 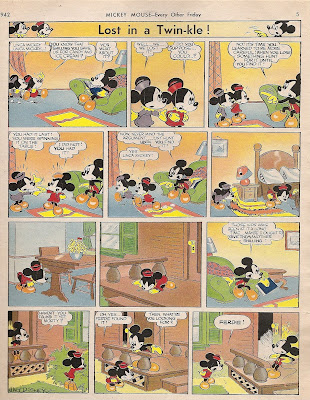 Above scan is from the color central pages of no. 309 (dated May 9th, 1942) of Britain's Mickey Mouse magazine and features a re-formatted reprint of an American Sunday newspaper Mickey Mouse strip from Nov. 23rd, 1941. This particular Sunday strip has never been reprinted in the US after its original publication in newspapers.
Posted by Kaya Özkaracalar at 00:01 No comments: