The above panel is from the Donald Duck Sunday newspaper gag comics of June 24th, 1945. This particular Sunday has never been reprinted in the US; below is a scan of its reprint from Britain's Mickey Mouse magazine no. 401 (Nov. 17th, 1945):

Posted by Kaya Özkaracalar at 08:17 No comments: 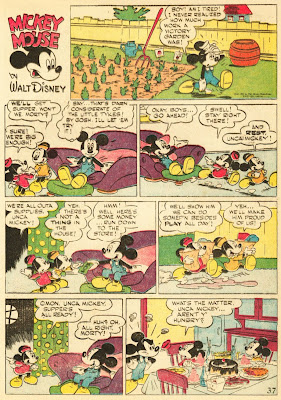 When Mickey Mouse Sunday newspaper comics were reprinted in Walt Disney's Comics & Stories magazine, they were re-formatted to fit the page layout and some panels from the original were often omitted in the process. For example, the above reprint of the Nov. 1st, 1942 Sunday in WDC&S no. 38 (Nov. 1943) is missing a total of 5 panels from the 12 panels of the original Sunday version.
Below are scans of the missing panels, as reprinted in Britain's Mickey Mouse magazine (wartime bi-weekly edition of Mickey Mouse Weekly) no. 399 (Oct. 20, 1945):

Note that only the third panel in the above scan is available in the WDC&S reprint..

..and only the central panel in the above scan.
The fifth missing panel is this reaction shot of Mickey, whose original place was just before the last panel: 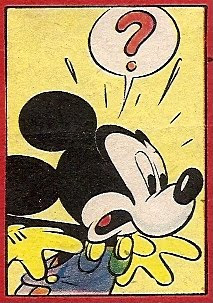 Posted by Kaya Özkaracalar at 05:51 No comments: 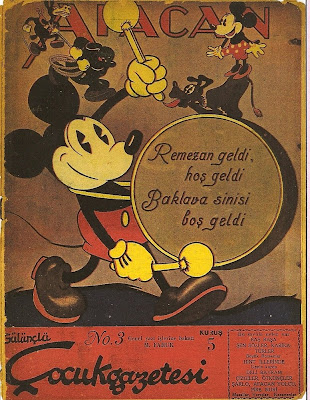 Mickey Mouse gag panels had appeared on the covers of several issues of the first series of Turkish children's weekly Afacan (1932-34) but since that publication was of tabloid size, the said panels took up a small portion of the covers' area which they shared with other, non-Disneyic items and thus were not cover illustrations in the conventional sense. The first proper Disney cover of a Turkish publication came with the no. 3, dated Dec. 6th, 1934, of Afacan's 2nd series, whose scan is above. In the central illustration, Mickey is drumming to herald the coming of the holy fasting month of Ramadan. The artist is unknown. The smaller figures at the top of the cover are apparently taken from yet-unidentifed foreign sources (the Horace in bondage figure at the upper left might have been cropped from a panel of Mickey Mouse daily strip continuity from 1931 featuring gypsies).
Despite the full-fledged Disney cover, the contents of the issue in question featured only one Disney comics, a gag from British Mickey Mouse Annual of 1933: 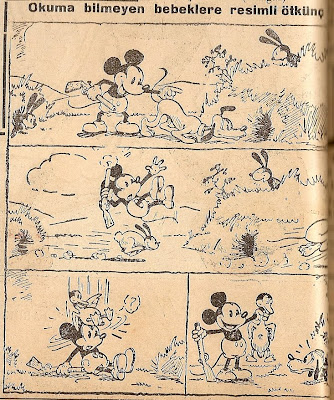 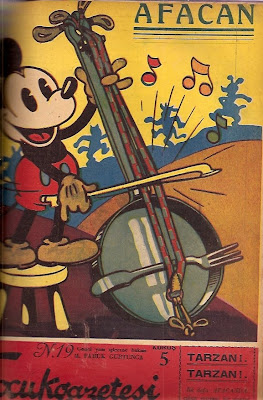 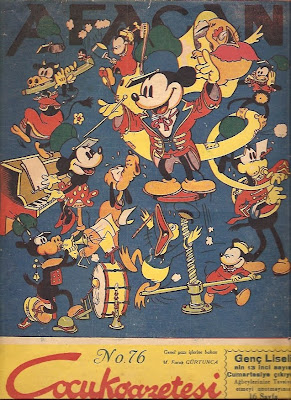 The next Disney cover in Afacan was in no. 134, dated June 10th, 1937, heralding upcoming adventures of Toby Tortoise ad Max Hare: 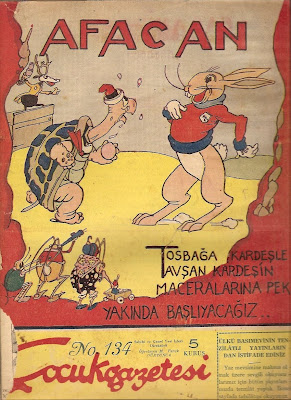 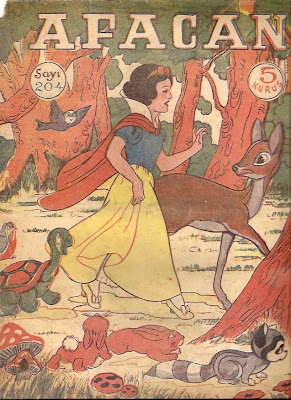 And this illustration is from the reverse of the cover of 1938 French album Blanche-Neige et les Sep Nains by Hachette.
Posted by Kaya Özkaracalar at 11:55 No comments:

DISNEY ILLUSTRATION ON THE COVER OF TURKISH CHILDREN'S MAGAZINE FROM 1939 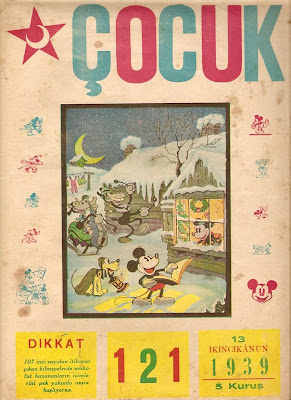 I give a break to my coverage of pre-war British Disney publications to post the above scan of the cover of a pre-war Turkish children's magazine which I acquired this weekend. It is no. 121, dated Jan. 13th, 1939, of Çocuk. The central color illustration is from the Disney Studio's Christmas/New Year's greeting card from 1931 (see post dated Dec. 5th, 2008 on vintagedisneymemorabilia.blogspot.com); if anyone can identify any other reprint of this illustration in any publication prior to its reprint in Turkey in 1939, I will be very grateful.
The contents of the issue in question does not contain any Disney comics or stories. However, several other issues, from 1943, which I also acquired, feature Mickey Mouse strips.
Çocuk was published by Dr. Fuat Umay, a parliamentarian who headed the public Children Protection Association. It is one of the very few (perhaps the first?) Turkish children's magazines based in Ankara, rather than in Istanbul.
Posted by Kaya Özkaracalar at 14:51 1 comment: