Britain's Mickey Mouse comics magazine reverted back to weekly period in 1950 and was re-retitled as Mickey Mouse Weekly as it was titled from its inception from 1936 till 1941. Two additional British-made Disneyic gag comics series were featured in the revitalized magazine, alongside British-made cover gags and Pinocchio gags which had started the year before and material of US origin,: the color 'Cubby and Tubby' and the black&white 'Bongo the Wonder Bear'. Of these, 'Cubby and Tubby' is of great interest as it is, to a large degree, a British creation.
The inspiration behind 'Cubby and Tubby' appears to be two bear cubs, one of whose is named as Cuthbert, which appear in a Li'l Wolf comics from the US Walt Disney's Comics & Stories no. 52 (dated Jan. 1945):

And the inspiration for Cuthbert and his sibling appears to be the two bear cubs from the Disney black&white cartoon short The Bears and Bees (1932).
In any case, when 'Cubby and Tubby' first appeared as a single-row strip spread over the bottom rim (soon, the strip would be shifted to the top rim) of the two central pages in no. 512 (scans at the top of this post), both of the cubs were of brown color, just like the bear cub friends of Li'l Wolf in WDC&S. Eventually, one of them began to sport orange fur, as in the below scans from no. 525:

The British artist(s?) responsible for 'Cubby and Tubby' were initially careless in differentiating the cubs. Note that in the above gag, the brown cub is named as Tubby. However, in subsequent gags, the name Cubby would stick to the brown one!
'Cubby and Tubby' has pleasant artwork while the humor in the gags is not always as qualified. It would be one of the longer running British-made gag series and continue till 1953.
Posted by Kaya Özkaracalar at 02:37 No comments: 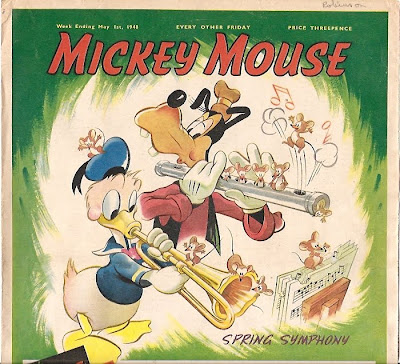 For the past few weeks, I have been covering British-made comics material published in Mickey Mouse in the late 1940s. I round up this coverage with today's post on gags which appeared on the covers of this British comics magazine. Initially in the post-war (as well as war-time) era, the covers of Mickey Mouse (or Mickey Mouse Weekly as it was titled till 1941) featured American strip material in irregularly re-formatted columns/rows, with the remaining cover space filled up with illustrations by British artists. In 1948, the cover layout was standardized with American-origin strip material taking up the lower 1/3rd of the cover and British illustrations taking up the remaining space. Initially, the British illustrations were unrelated to the accompanying American strips in terms of content, like in the above scan of no. 464 whose accompanying strip was a Li'l Wolf comics from US Walt Disney's Comics & Stories redrawn and reformatted as a strip. Eventually, the British illustrations began to take their cue from the strips, as in the below scan(s) from no. 472 (whose strip is an abridged -missing 2 panels from the original- version of an American Mickey Mouse Sunday strip): 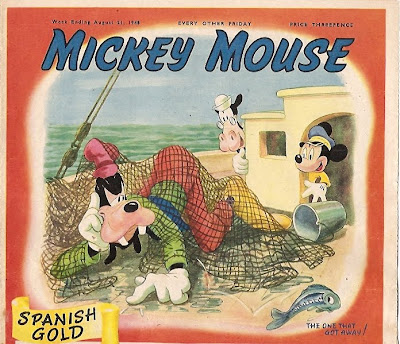 In the above example, the British illustration is related to the strip in the sense of featuring the same set of characters in the same setting, but is nevertheless independent of it in the last analysis in terms of plot. By 1949, the relation began to go further than that with the British-made illustrations functioning as if they were enlarged introductory panels ('splash panel') of the American-origin strips in the sense of plot as well, as in the below example from 491 (whose stip is again an abridged version an American Mickey Mouse Sunday strip): 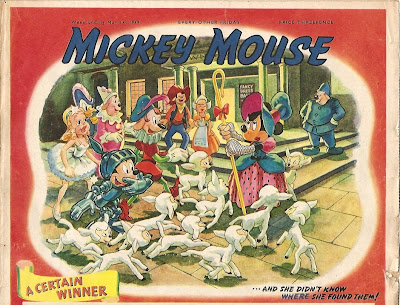 By this time, British-made strips themselves also had began to appear occasionally, an early example being the cover of no. 488 whose scan I had posted at the bottom of my below post on April 9th. By the summer of that year, such all-British covers would become the norm. The below scans are from no's 495, 498 and 500: 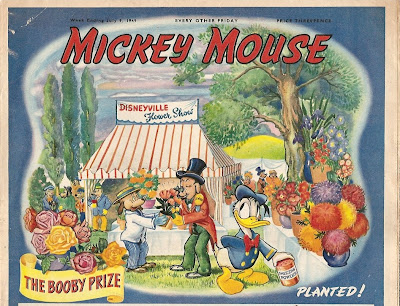 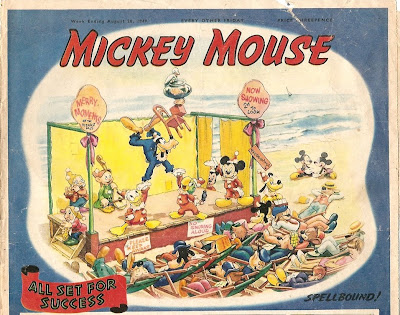 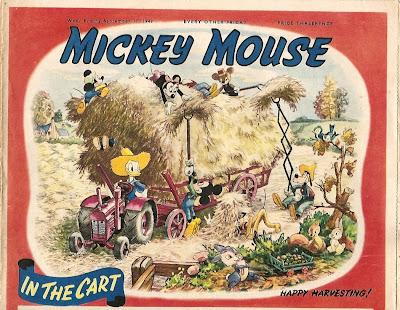 Posted by Kaya Özkaracalar at 14:06 No comments: