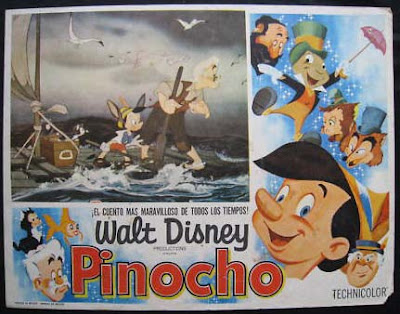 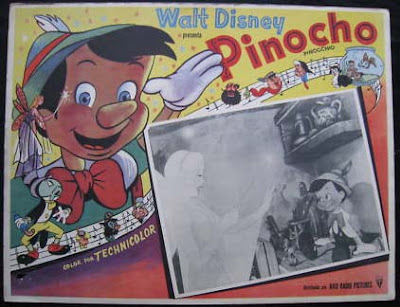 Posted by Kaya Özkaracalar at 02:17 No comments: 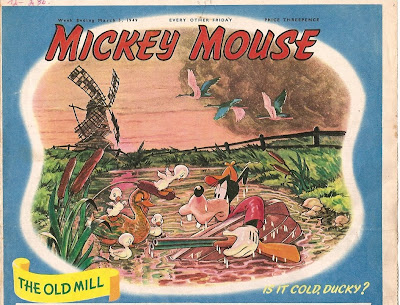 This Goofy gag comics from the cover of no. 486 (dated March 5th, 1949) of Britain's Mickey Mouse comics magazine is one of the better British-made gags featured on the covers of this magazine. Not only is the humour well-thought, but the art of the splash panel is excellent in my opinion.
The below cover of the preceeding issue is also noteworthy. It actually features a re-drawn and abridged version of an American Sunday newspaper strip from 1945 with a new (British-made) splash panel, adding a distinctly local cultural flavor with reference to British obsession for afternoon tea: 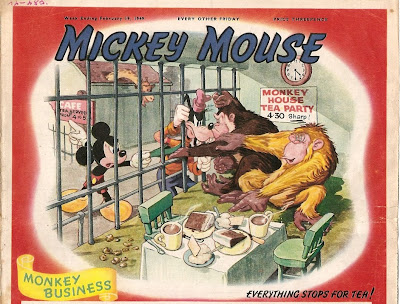 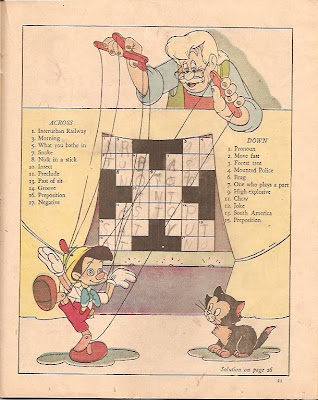 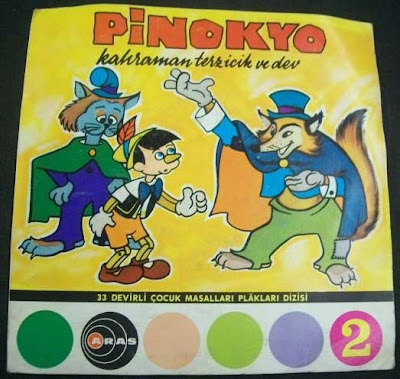 This is a Turkish "children's fairy tale" vinyl record (possibly from the late 1960s or early 1970s) of Pinocchio. It's not a song record, but features an audio renditio of the tale of Pinocchio.
Posted by Kaya Özkaracalar at 00:01 No comments: 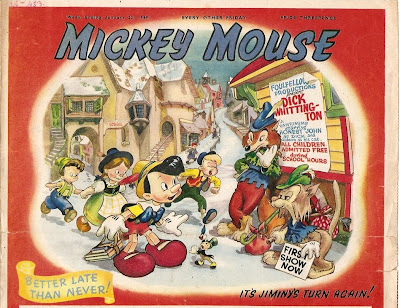 In a below post on April 26th, I had covered British-made Pinocchio gag strip series ran in the color central pages of Britain's Mickey Mouse Weekly between 1949-53. Recently, I've come across this issue, no. 483 (dated Jan. 22d, 1949) which features a British-made Pinocchio gag comis on its cover, predating the start of the series by about half a year.
Posted by Kaya Özkaracalar at 00:01 No comments: 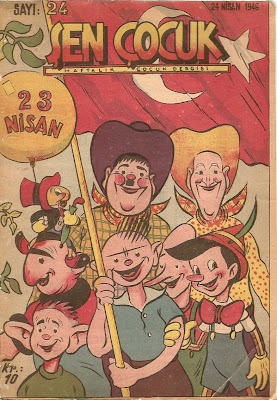 Above scan is of the cover of no. 24 (dated Apr. 24th, 1946) of a little-known Turkish children's weekly magazine titled Şen Çocuk [Merry Kid], showcasing Pinocchio and Jiminy Cricket alongside Laurel & Hardy as well as a bunch of Turkish comics characters featured in that magazine. Şen Çocuk had began to serialize the first comics adaptation of the feature-length Disney animation movie Pinocchio (1940), originally run in the US newspapers in 1939-40 as a Sunday half-page comics on the eve of the movie's theatrical release, from its first issue (Nov. 14th, 1945) onwards. 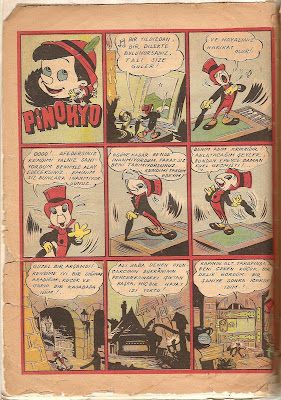 As can be seen from a comparison of the first installements in Şen Çocuk (above scan) and the US newspapers (below image, taken from the outducks archive), the Turkish magazine had produced a traced version with panels of reduced length in most cases, causing a loss of detail and overall decrease in the beauty of the original art. The practice of tracing would be very common in cheap Turkish comics publications of the post-war era. 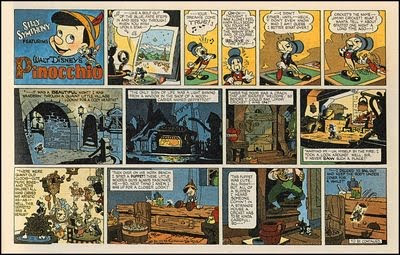 The first issue of Şen Çocuk had also promised a locally-made Mickey Mouse comics for the coming issues, but that promise wouldn't materialize in the next 23 issues and I don't know if the magazine continued publication beyond the first 24 issues available in my collection. 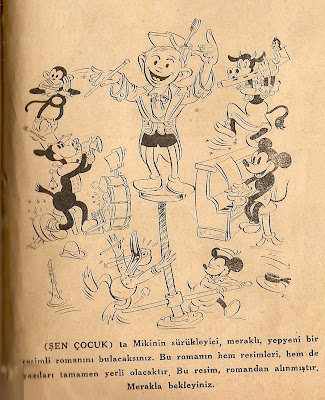 By the way, the art in this promo for the promised Mickey Mouse comics is a reworking of the cover art of no. 8 (dated March 28th, 1936) of Britain's Mickey Mouse Weekly. 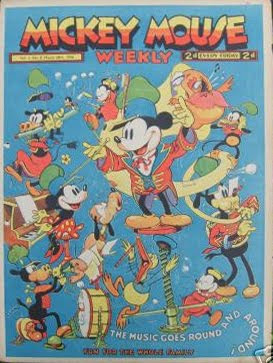 Posted by Kaya Özkaracalar at 02:38 No comments: