The longest-running British-made gag comics series to start in Britain's Mickey Mouse comics magazine would be 'Pinocchio'. It started in no. 495 (dated July 9th, 1949) as a single-row strip spread over the top rims of the two central pages (scan above is broken into two due to limitations of my scanner) after the end of 'The Reluctant Dragon' strip. Soon, it would be reformatted as in the below scan from no. 500: 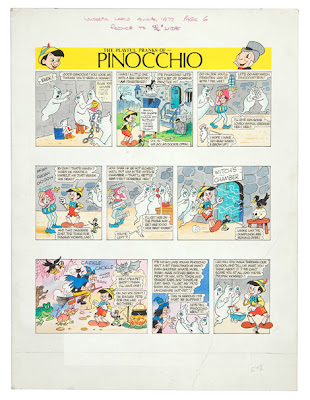 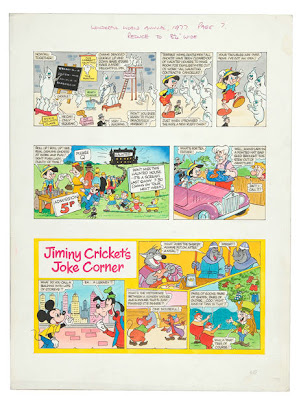 Posted by Kaya Özkaracalar at 04:22 2 comments:

'The Reluctant Dragon' comic strip which was serialized in Britain's Mickey Mouse comics magazine in 1949 as a single-row strip spread over the top rims of two central pages was a redrawn version of the comics story published as a "one-shot" comics in the US in 1941 (which itself was an adaptation of the feature-length Disney movie from the same year). The above scan (broken into two due to the constraints of my scanner) is of the first installment of the British version (from no. 488) and below images are of the first three pages of the original American version: 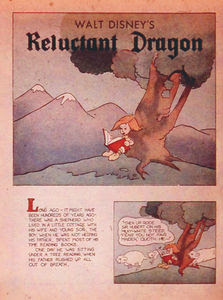 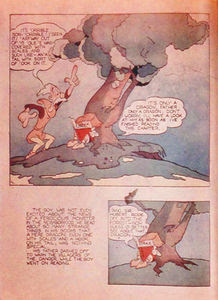 The British version, which, in my opinion, is actually an improvement over the American original by Irvin Tripp, was probably the work of Basil Reynolds.
Posted by Kaya Özkaracalar at 10:41 No comments:

Besides the 'Danny the Lamb' strip, two other British-made gag comics published in Britain's Mickey Mouse once this comics magazine was re-enlarged to 12 pages beginning with no. 499 (dated Sept. 3rd, 1949) were a Figaro strip and 'The Adventures of Little Pedro', both of which were apparently short-lived. Figaro had debutted in the animated feature Pinocchio (1940) as the cat of the wooden-boy's father Gepetto. The Figaro strip in Mickey Mouse (the above scan is from no. 499 and the below ones from 500 and 505) had come at the tail end of a resurgence of the popularity of the feline character when he had starred in a series of six cartoon shorts (as Minnie's cat) between 1943-49 (most of these were adapted to comics or illustrated text story formats published in the US Walt Disney's Comics & Stories). Decades later, he would also star in a series of one-page gag comics in continental Europe between 1999-2001.

Pedro the Airplane was the star of one of the animation segments of the feature-length compilation movie Saludos Amigos (1943).

In the same year as 'The Adventures of Little Pedro' was published in Mickey Mouse (the above scans are from no. 499, 500 and 500), he had also co-starred with Dumbo the Flying Elephant in a 9-pages comics published in no. 234 of Walt Disney's Comics & Stories. However, he had earlier appeared in one cover of the British Mickey Mouse (no. 398, dated Nov. 6th, 1945), making his first-ever appearance in the cover of a comics magazine anywhere in the world: 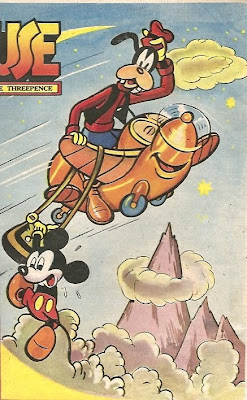 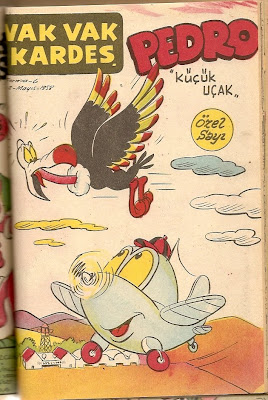 Posted by Kaya Özkaracalar at 00:09 No comments:

'Doc's Woodland Wonders' was a nature-themed strip published in Britain's Mickey Mouse comics magazine between 1948-49. Basil Reynolds (see the below post for more on him) was the main artist. It debutted in no. 462 (dated April 3rd, 1948) as a b&w strip but was soon moved to the color central pages, replacing the non-Disneyic comic strip 'The Adventures of Tom Sawyer', and initially featured the Seven Dwarfs and occasionally some other Disney characters. Eventually, it was shifted first to the b&w pages and then, with no. 483, reverted back to color in the bottom portion of the last page (back cover) but the Disney characters began to be omitted from the strip henceforth even though the name of Doc (of the Seven Dwarfs) remained in the title. It lasted till (including) no. 498. The scans in this post are from no.'s 464 (above), 465, 467, 468, 470, 472, 475, 478 and 482.

Between 1953-54, Reynolds did another nature-themed series for Mickey Mouse Weekly titled 'True Life Adventures'.
Posted by Kaya Özkaracalar at 12:25 2 comments:

Basil Reynolds (1916-2001) was one of the young artists who had joined the team of Britain's Mickey Mouse Weekly during its inception in 1936, creating the excellent (non-Disneyic) 'Skit, Skat & the Captain' humourous comics for this magazine, as well as contributing illustrations for the 'Shuffled Symphonies' text story series, not to mention making Elmer and Tillie gag comics. His work would disappear in MMW during the 2nd World War (perhaps he was drafted?), with 'Skit, Skat & the Captain' being taken over by an inferior artist before being discontinued altogether, but he would return to the same magazine, then retitled as Mickey Mouse, sometime after the war. In a comment appended to one of the below posts (March 26) in this blog, John Wigmans had identifed the artist for some of the British-made Bucky Bug material in Mickey Mouse in 1947-48 as Reynolds. The 'Danny the Lamb' series, which had started in no. 499 (dated Sept. 3rd 1949; see above scan), is also by Reynolds. The below scans are from no. 500 and no. 505:

Reynolds' 'Danny the Lamb' was first heralded in the editorial page of no. 488 of MM, announcing the new comics to be featured in the coming issue when the magazine would be re-enlarged back to 12 pages (it had been reduced to 8 pages in 1940 during the tail end of its first weekly era): 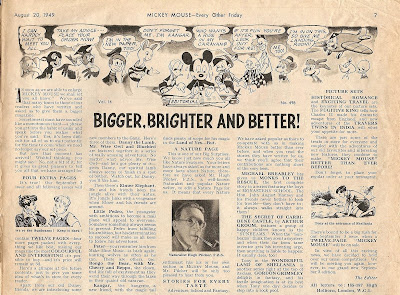 'Danny the Lamb' would be short-lived and soon replaced by 'Big Top', a non-Disneyic strip by Reynolds.
Danny had first appeared in the non-animation Disney movie So Dear To My Heart (1949). Immediately prior to the debut of Reynold's gag comics series, Danny was featured in an illustrated text story in the US Walt Disney's Comics ad Stories no. 107, dated Aug. 1949. He would appear in four more such stories in the same magazine between 1950-62, but the British series would remain his only proper comics.
Posted by Kaya Özkaracalar at 00:21 1 comment:

BRITISH-MADE GAG COMICS DERIVED FROM 'PETER AND THE WOLF'

British-made comics published in Britain's Mickey Mouse comics magazine in 1948 include several gag comics featuring the characters of the 'Peter and the Wolf' segment of Disney's feature-length compilation animation Make Mine Music (1946). The above scan is from no. 486, (June 26th, 1948) and the below ones from no. 499 and no. 500:

'Peter and the Wolf' is originally a musical story (with text to be narrated and music to be performed) by Soviet composer Sergei Prokofiev. Its first comics version was published in the US Walt Disney's Comics & Stories simoultanously with the release of Make Mine Music. Hence, the gags in British Mickey Mouse were Peter and his nemesis' second comics appearances. Next, there was a newspaper comics in 1954 and a further comics adaptation in the Silly Symphonies compilation comics magazine in 1957.
Posted by Kaya Özkaracalar at 10:47 No comments:

Labels: make mine music, MICKEY MOUSE WEEKLY, peter and the wolf, peter the hunter, the adventures of peter, UK 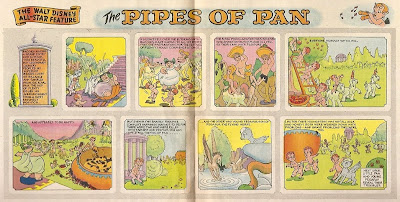 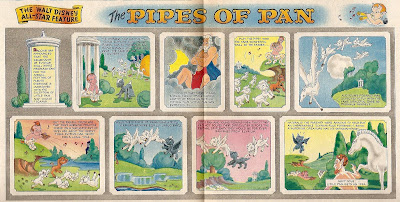 The last continuity published in Britain's Mickey Mouse comics magazine as part of 'The Walt Disney All-Star Feature' series was 'Pipes of Pan', serialized in 10 parts between no.s 489-499 in 1949 (the above scans are of the 2nd and 3rd parts). This odd comics, which notably lacks any speech balloons, appears to have been inspired from, 'though not really based on, the 'Pastoral Symphony' segment of the feature-length Disney animation Fantasia (1941). 'Pastoral Symphony' is mostly made up of dance sequences of various creatures of ancient Greek mythology, the only plot element being Zeus stirring up a storm to interrupt the dances. 'Pipes of Pan', on the other hand has a more distinctive plot. Pan's son, who seems to lack musical skills but is nevertheless expected to excell in this regard, practices with his father's pipe, only to disturb Zeus with the bad music he makes (below scan of part 5): 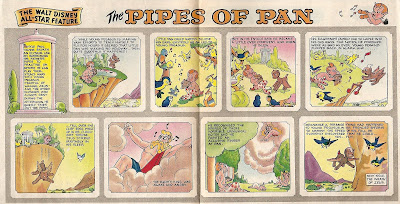 Zeus assumes Pan to be the culprit and wrongly imprisons him (below scan of part 7): 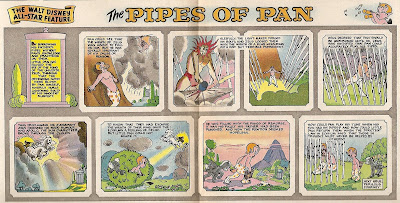 Hence, Pan's son embarks on a "perilous" journey to heavens to explain the situation to Zeus and clear his father's name. It all ends happily, as in the below scan of the last istallement: 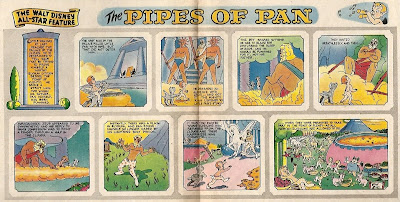 Prior to the start of the serialization of 'Pipes of Pan', Pan and his son were featured in the cover gag of no. 488: 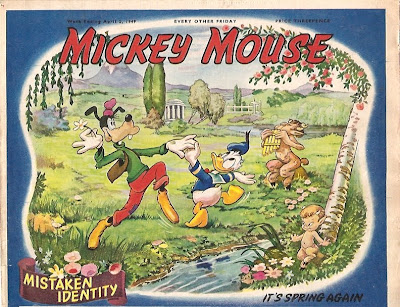 Beyond the tenious connection to upcoming 'Pipes of Pan', the splash illustration of this cover is very interesting for the queer air to it...
Posted by Kaya Özkaracalar at 12:20 No comments: 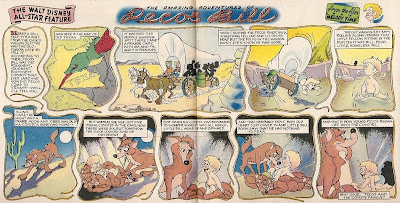 I had noted in the below post that the British-made 'The Walt Disney All-Star Feature' which had started in the color center pages of Britain's Mickey Mouse comics magazine as gag-comics in 1948 had soon evolved into continuities. One of these was 'The Amazing Adventures of Pecos Bill', serialized between no.'s 483-488 in 1949, which is of note as the first comics version of Disney's take on Pecos Bill who had been featured in one of the animation episodes of the compilation movie Melody Time (1948). The above scan is of the first installement from no. 483 and the below ones are from no.'s 484, 485, 486 and 488 (last installment): 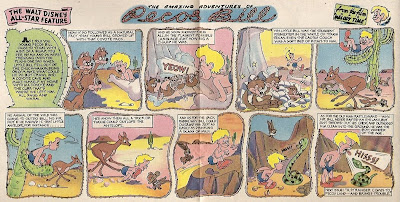 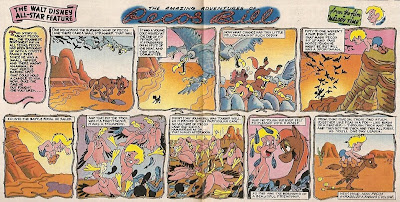 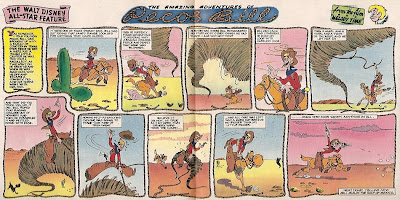 Pecos Bill is a fictional cowboy popularized in American pulp fiction in the early 20th century as allegedly a real figure of (apparently fake) folktales. Prior to Disney's Melody Time, he had already been featured in a US comics in the pre-war era, but, unlike many of the characters featured in Disney cartoons, he was never utilized in US Disney comics. Interestingly, Guido Martina, the main writer of Italian-made Disneyic comics, created a non-Disneyic Pecos Bill comics, which would become a hit in Italy (as well as in Turkey), in 1949, the same year as Pecos Bill's appearance in the British Mickey Mouse.
Posted by Kaya Özkaracalar at 01:40 2 comments: 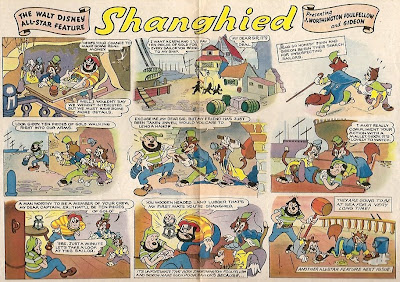 As noted in the below posts, British-made Disneyic comics had made a come-back in Mickey Mouse comics magazine in 1947 with Bucky Buck strips. Sometime in mid-1948, the British-made Bucky Bug material gave way to a new series titled 'The Walt Disney All-Star Feature'. The above scan is from no. 467 (June 12) and the below one from no. 468 (June 26): 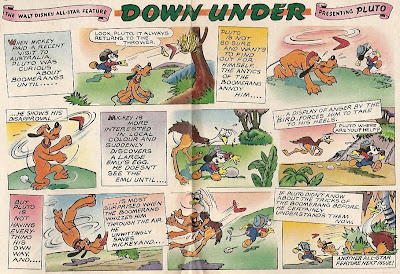 Soon, 'The Walt Disney All-Star Feature' would evolve into a continuity format, beginning with the serialization of a Dumbo adaptation.
Posted by Kaya Özkaracalar at 03:43 No comments: