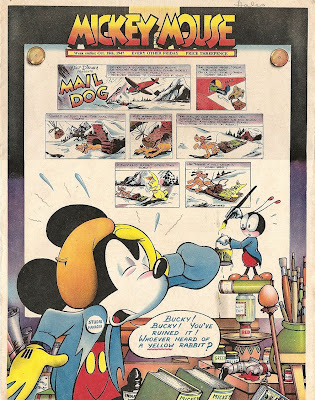 A large number and variety of British-made Disneyic comics had been published in Britain's Mickey Mouse Weekly from its inception in 1936 till the early 1940s. My collection of this magazine during its bi-weekly run between 1941-50, when it was re-titled as Mickey Mouse, is still very incomplete, but British-made Disneyic comics appears to have diminished or altogether disappered during the first half of this period, only to make a comeback with single-row 'Bucky Bug' strips at the bottom portion of its last pages (back covers). Below scans are from issues no. 431, 448, 450 and 451, all from 1947. The above scan is of the wonderful cover of 450. 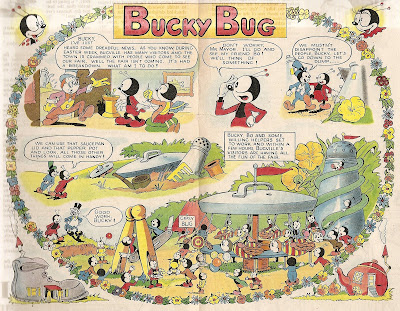 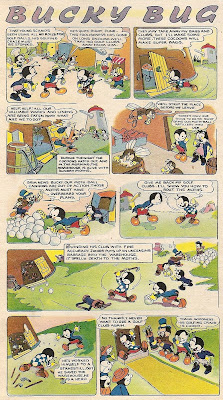 In the US, Bucky Bug had debutted in the Silly Symphony Sunday half-page comics series in 1932, prior to the release of the cartoon short Bugs in Love later that year. In 1942, these newspaper comics would begin to be reprinted in re-formatted form in Walt Disney's Comics & Stories where new Bucky Bug comics would also begin to be published from 1943 onwards.
UPDATE: Note the comment appended to this post by John Wigmans, who identify the artist on some of the British Bucky Bug material as Basil Reynolds.
Posted by Kaya Özkaracalar at 16:26 2 comments: 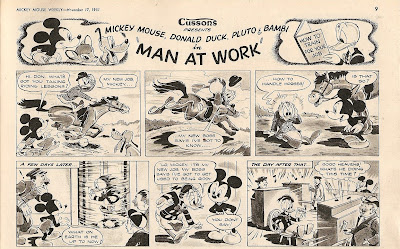 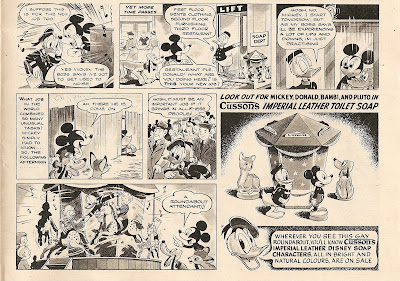 Britain's Mickey Mouse Weekly is notable for, among many other aspects, featuring original, ie. British-made, Disney comics for most of its duration from 1936 thru 1957. However, the above scan (from no. 601, dated Nov.17, 1951) is of a rather unique British gag-comics in that it has been commissioned as a tie-in to a British Disney merchandise. Not only is the plot of the comics related to the concept of the promotion strategy of the soap, but the merchandise itself also appears as a plug-in at the second panel of the third row.
Another one-pag gag comics promoting the same soap brand was published in no. 615 (dated Feb. 22d, 1952).
Posted by Kaya Özkaracalar at 12:05 No comments:

Between 1936-39, the publishers of Britain's Mickey Mouse Weekly also published four holiday special issues each year on the eve of the Christmas season. These are some of the rarest pre-war British Disney publications. Even though all four issues are fully indexed at inducks indexes, outducks archive hosts cover scans from only the last two. I haven't been able to come across the cover image of the first one myself anywhere either, but the above scan from Mickey Mouse Weekly no. 93 includes a reproduction of the cover of the 1937 special.
UPDATE FROM NOV. 23rd, 2010: A copy of this holiday special finally surfaced on ebay and was sold for 80 pounds (=127.5 US dlrs)! Below are scans of the front and back covers: 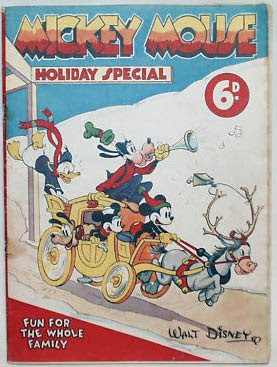 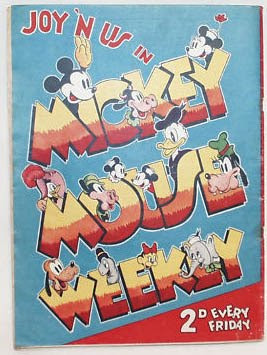 Posted by Kaya Özkaracalar at 01:42 2 comments: 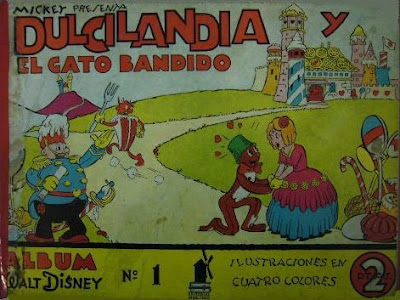 Thanks to cover scans recently uploaded to outducks archive by outducks contributor Carlos de Grigorio, I became aware of a series pre-war Disney comics albums from Spain: 5 albums put out in 1936 by publisher Molino. According to the inducks index, no. 1 (above) features Spanish editions of 'Cookieland' and 'Robber Kitten', and no.2 (below) 'Three Little Kittens' and 'The Boarding-School Mystery', all from the Silly Symphony Sunday newspaper comics series. 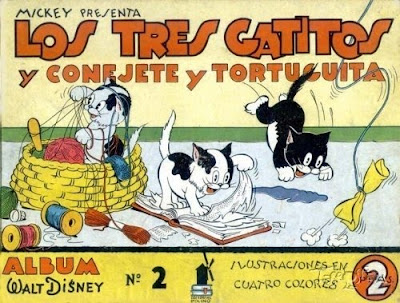 The precise contents of the remaining three albums are yet unknown (yet unindexed), but the covers of no.3 and no. 5 indicate that they feature Mickey Mouse Sunday newspaper comics. 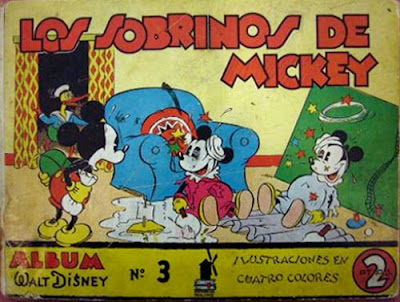 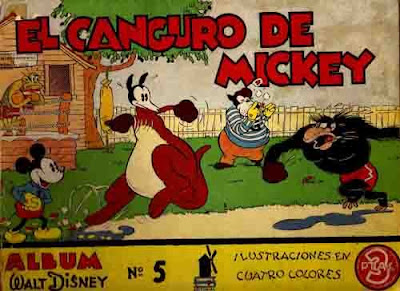 No. 4, whose cover scan is unavailable, is titled as 'Donald y Mickey policias'.
Posted by Kaya Özkaracalar at 09:29 No comments:

Yes, this is not pre-war, but I think it's vintage enough. Below images are the first 5 daily Scamp strips, as published in Turkey's Milliyet newspaper, featuring the beginning of Scamp's first adventure:

Scamp had first appeared at finale of the animated feature Lady and Tramp (1955, and its comics adaptations from the same year) as the new-born child of the movie's protagonists. Later that year, he began to star in his own daily strip, scripted by Ward Greene and with art by Dick Moores. As can be seen from the above, the Scamp daily strips initially had entailed continuity adventures, but a gag-a-day approach would be adopted in the later years.
Scamp began to be published in Milliyet on Dec. 18th, 1955, starting with the original start of the strips from Oct. 31, hence with only a one and a half month delay from its debut in the US (*). It was retitled as 'Boncuk' [the Little Bead]. It was probably the first licensed publication of any Disney comics in Turkey. It was popular enough to be carried in Milliyet till March 2d, 1974.
From my own childhood, I recall that 'Boncuk' was still being published in some other Turkish newspaper by late 1970s or early 1980s.
A colorized and re-formatted version of this first adventure of Scamp would be published in no. 679 of Walt Disney's Comics & Stories in 2007.
(*) However, while the Scamp strip arrived in Turkey with almost no delay, the movie Lady and the Tramp, which had actually preceeded it, reached Turkey a year after the strip started! Below is the newspaper ad (from Milliyet) for its Turkish release on Dec. 26, 1956:

Posted by Kaya Özkaracalar at 06:59 No comments: