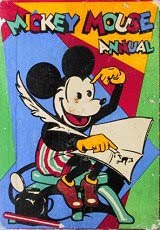 The first Mickey Mouse Annual, published by London's Dean & Son Ltd, is of great significance in the history of Disney publications. Published possibly around Christmas of 1930, it is the first-ever Disney book published for retail, a Mickey Mouse Book which had come earlier in the same year in the US having been printed as a give-away for promotion purposes. Furthermore, this MMA marks the first-ever appearance of Disney comics produced for publication other than newspaper syndication.

The annual opens with the below color plate... 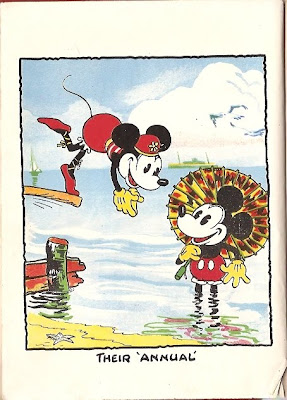 ...opposite this title page: 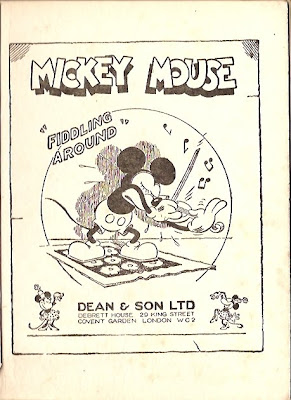 Oddly, there is no reference whatsoever to any affliation to the Disney company in either this title page or anywhere else in the annual that I could spot (most subsequent British Disney publications would include a tagline about "permission from the Walt Disney Mickey Mouse Ltd.").
While the larger figure of Mickey is copied from a US cartoon poster, the small Minnie figures at the bottom of the title page are taken from a model sheet produced by Disney to be utilized in creation of graphics on misc. items. See post dated March 30, 2009 from http://vintagedisneymemorabilia.blogspot.com/ for some info on this sheet as well as further examples of its utilization in MMA, including the figures in the below introduction page: 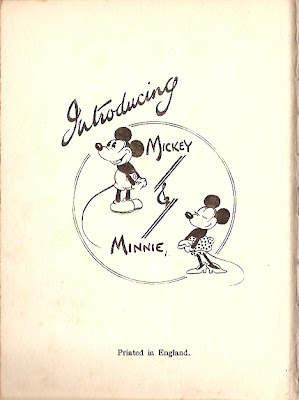 Below is the scan of the first gag page (acc. to David Gerstein's index at inducks, it is "partly made up of US clip art"). 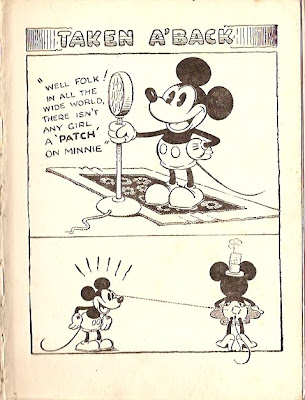 This is in a format close the comics format in the sense it includes more than one 'panel', but, in my opinion, would qualify only as a 'pseudo-comics' because while the the panels are sequential in a sense, they are not in the same diegesis (ie. the event depicted in the second panel is not of the same plane of reality as of the first panel).
The subsequent page on the other had features the first gag in the 'proper' comics format: 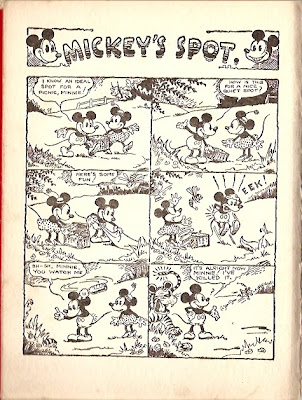 The artist on this, and most of the other comics pages in MMA, is Wilfred Haughton, best known as the artist of the highly acclaimed cover illustrations of Britain's Mickey Mouse Weekly onwards from its inception in 1936 till circa 1940. Haughton had been working on Dean's MM Annuals prior to his assignment to the MMW project. The bulk of the first MMA consists of such gag-a-page comics. Below follows a sampling of my favorite ones or those which I find interesting for various reasons: 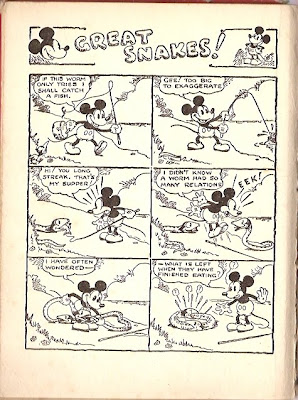 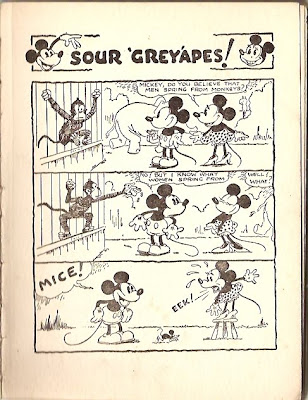 I find the above gag noteworthy for two reasons. First, the side-line inclusion of a secondary humour element in the monkey silently stealing Mickey's food in the second panel is remarkable. Furthermore, producing a gag about women's fear of mice personified in Minnie's such fear is, on one had, ironic since she is, after all, an andromorphized mouse, and, on the other had, significant in showing the degree of internalizing the andromorph nature of Minnie (and Mickey).
The below gag is interesting in its inclusion of proper human beings into Mickey's world, which is out of line with Disney comics in general: 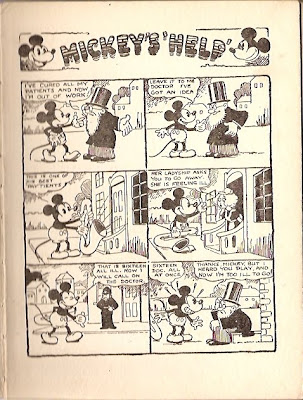 For my taste, I personally find the two below gags some of the funniest in this annual: 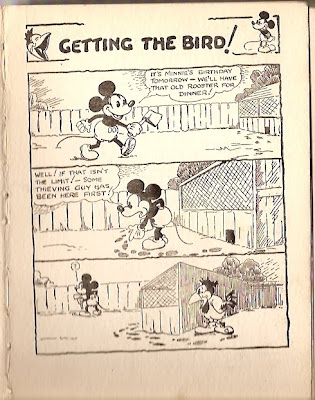 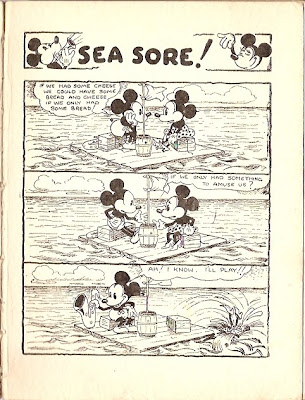 Unfortunately, MMA also includes some rather distasteful gags as well: 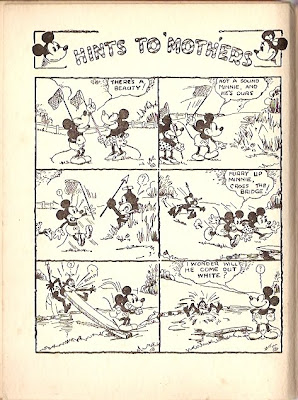 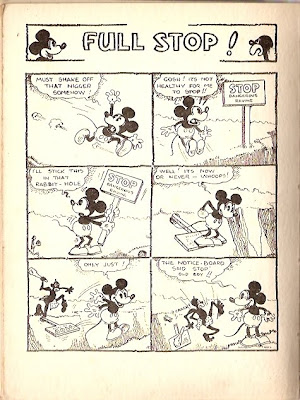 Even if the majority of the gag-comics in the first MMA can be assumed to be the work of Haughton, there were clearly more than one artist working on the comics in this publication. Below is a sample with markedly different and far more cruder graphic style: 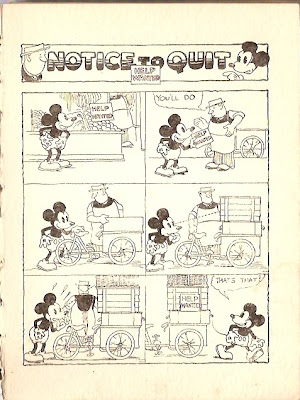 In addition to gag-a-page comics, the first MMA also includes several gags in the format of non-panelized illustrations accompanied with text. The below one is interesting because it features Minnie's "papa", which we never see or even hear about in US comics: 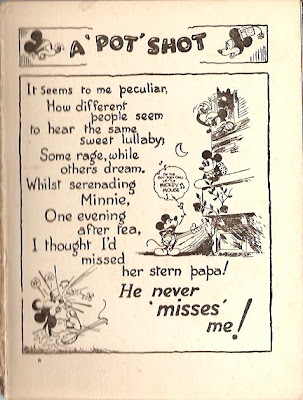 Several of these non-comics gag pages incorporate illustrations from the US Mickey Mouse Book, such as the below one (see the post on MMB from Nov. 22, 2008 on this blog for a comparison with its original US edition): 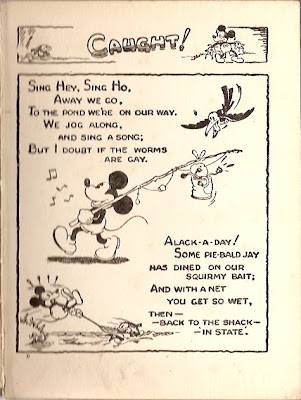 The first MMA ends with this advertisement: 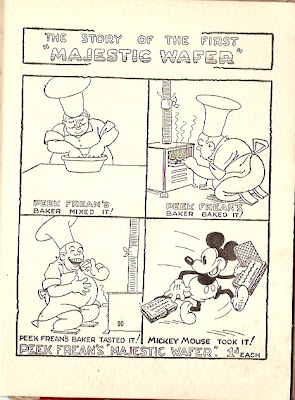 However, in addition to the first one at the very beginning, there are three more color plates throughout the annual: 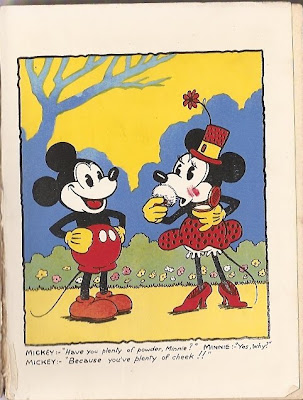 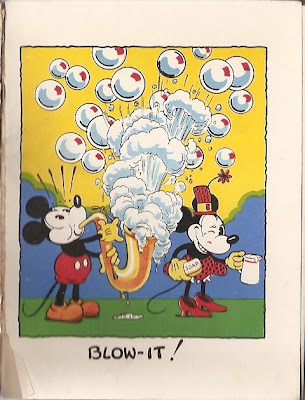 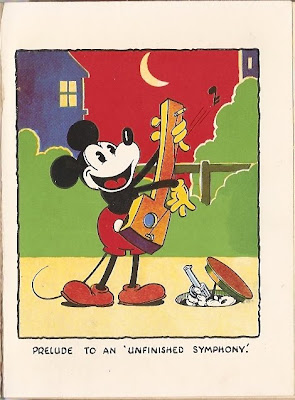 Posted by Kaya Özkaracalar at 03:01 5 comments: 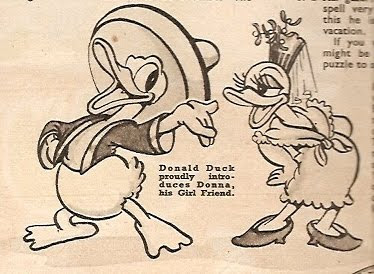 Donald's longtime girlfriend had actually debutted as a Mexican lady named Donna in the cartoon Don Donald (1937). It appears that she might have been initially intended as a one-time character as she was not seen in any further cartoons for more than three years until she appeared in Mr Duck Steps Out (1940) as the Daisy we all know. Following the release of that cartoon, Daisy would accompay Donald in US newspaper comics strips even though Donna had not made it into comics in the US. However, Donna had frequently appeared in Britain's Mickey Mouse Weekly. Her first print appearance in MMW -the scan above- was in the editorial page of no. 47, dated Dec. 26th, 1936, promoting the upcoming Don Donald cartoon. Scan of the corresponding text is below: 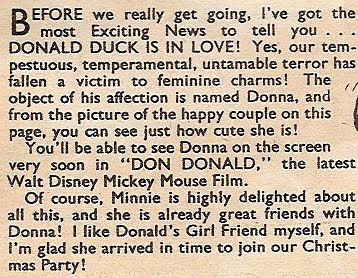 In the next issue, Donna's portrait was seen on the wall of Donald's home in a gag-strip, titled 'A "Good" Start For The New Year!' and by an unknown British artist, in the color central pages, marking her debut in the comics format: 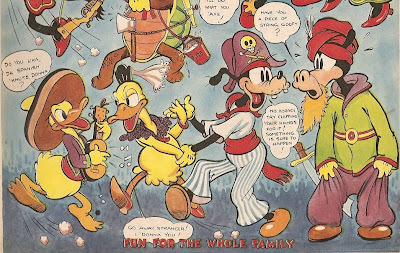 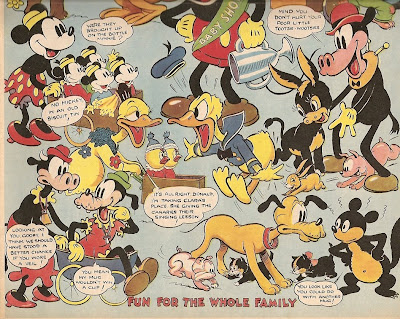 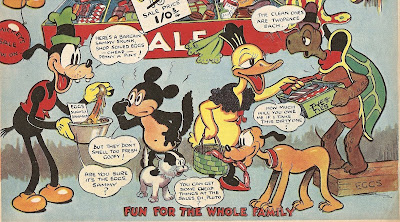 In no. 58, she was the subject of this depiction of a song: 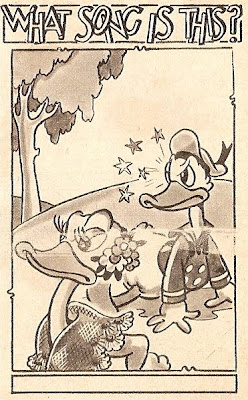 The answer would be revealed in the next issue as 'Why did I kiss that girl?', apparently a popular song dating from 1920s. That issue included the below puzzle featuring Donald and Donna: 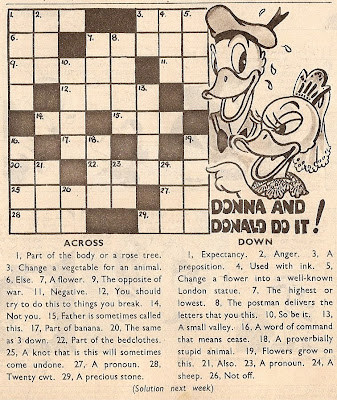 No. 66 of MMW announced an upcoming new comics serial headlining Donald and Donna, which would be the first-ever adventure comics of Donald:

Posted by Kaya Özkaracalar at 10:27 No comments: 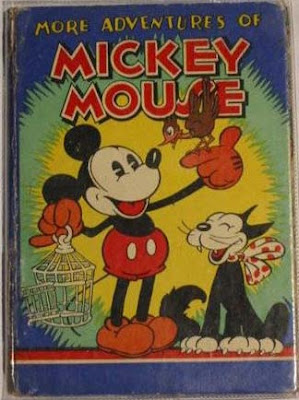 This book appears to be a retitled British edition of McKay's The Adventures of Mickey Mouse - Book 2, with new cover art. Actually, the cover of Dean's edition is a reworking of the back cover of McKay's edition, with Minnie redrawn as Mickey! 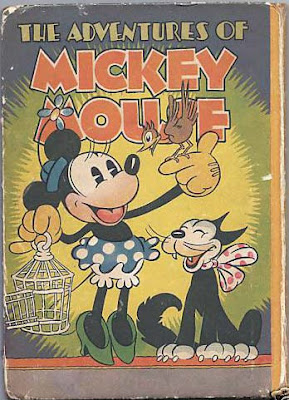 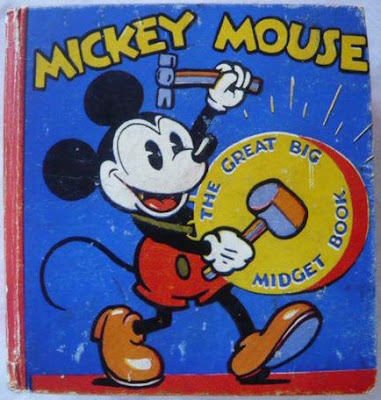 I am not sure if the content of this book is from one of the American 'Big Little Books'. Next year, Dean would publish the British edition of the pop-up book Mickey Mouse in King Arthur's Court, with identical cover art as its American edition by Blue Ribbon from a year ago. In 1934, the London & Glasgow-based Collins Clear Type Press would also begin publishing Mickey Mouse books and would really begin to dominate the British market of Disney publications throughout the rest of the decade, but Dean would also continue to publish Disney books. In 1935, they published British editions of McKay's Mickey Mouse Movie Stories Book 2 from the previous year, as well as Three Orphan Kittens, Tortoise and the Hare and Robber Kitten, illustrated story adaptations of Disney's 'Silly Symphony' cartoons published in the same year in the US by Whitman. These large and oblong-formatted books are among the best-looking pre-war Disney books with numerous beautiful full-page color illustrations. Apart from the Mickey Mouse Annuals which continued to be published well into the next decades, the last Disney books by Dean in the pre-war era appear to be a Snow White Annual from 1938 and Snow White and Magic Mirror from 1939, the latter with 3-D plates to be viewed with special spectacles.
Collins' Disney books are too many to list here and would better be dealt in a separate blog, but three other British publishers needs to be mentioned in covering the pre-war era, John Lane the Botley Head, the Birn Brothers Ltd and the Juvenile Productions, all of which will also be covered in future blogs.
Posted by Kaya Özkaracalar at 11:22 No comments: