When Britain's Mickey Mouse comics magazine's page count was increased to 12 from 8 with no. 499 (dated Sept. 3rd, 1949), one of the new strips added to the roster was 'Bongo, Bippo and Mr. Cherry' (above scan from no. 499). This humorous British-made b&w strip, which entailed a gag-week format within a loose continuity over the weeks, featured the Disney character Bongo the bear in the company of two traveling showmen. It was however shortlived as such. By early 1950, the strip's cast had been dispersed into two separate strips. While the two human characters gained their own two-row strip titled ''The Big Top featuring Mr Cherry & Bippo The Clown' in the central color pages, Bongo began his solo b&w strip career as 'Bongo - The Wonder Bear' (the below scan is from no. 508, dated Jan. 7, 1950):

The reason for the break-up is perhaps explained in the concluding episodes of the 'Bongo, Bippo and Mr. Cherry' strip, but I don't have those issues unfortunately. Perhaps the editors thought that putting Bongo in the company of showmen was incompatible with the character's authentic origin: Bongo was a run-away bear from the circus in the animation movie Fun and Fancy Free (1947) where he had debutted (his segment was based on a story by nobel-winnner author Sinclair Lewis).
While 'The Big Top' was clearly the work of Basil Reynolds, the artist(s?) behind 'Bongo, Bippo and Mr. Cherry' and 'Bongo - The Wonder Bear' is not determined. However, Reynolds appears to have a hand in at least some strips of 'Bongo - The Wonder Bear' as in the below example from no. 538 (dated Sept. 3rd, 1950) which betrays his lettering:

'Bongo - The Wonder Bear' would cease in 1951, the last strip appearing in no. 574.
In the US, Bongo had two one-shot comics in 1956 and 1958, but his comics appearances became scant in the 1960s and 1970s. He hasn't been seen since 1979.
As a bonus, I close this post with a scan of a cover of a Turkish comics magazine from 1963 which mark the only solo cover appearance of Bongo anywhere in the world. The cover illustration is actually a reworking of the splash panel of a comics of American origin: 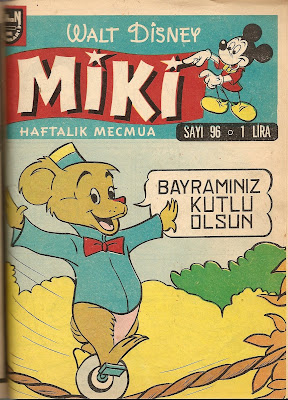 Posted by Kaya Özkaracalar at 11:46 No comments:

In an earlier post (on April 26th, 2010) in this blog, I had covered British-made Pinocchio gag comics run in Britain's Mickey Mouse Weekly between 1949-53. The plots of most of these are didacticly moralistic as they involve the mishaps Pinocchio has to endure when he fails to act 'properly' as dictated by Gepetto and/or Jiminy Cricket. However, the gag from no. 511 (dated Feb. 18th, 1950) is rather unusual as seen in the above scan...
Posted by Kaya Özkaracalar at 13:26 No comments: 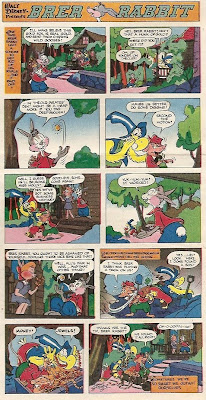 The 'Uncle Remus and His Tales of Brer Rabbit' Sunday newspaper comics, based on characters from Afro-American folktales compiled by folklorist J.C. Harris, had began to be run in US newspapers in 1945 as production for a feature-length live-action/aimation hybrid movie based on the tales commenced (the movie would eventually be released in 1946 as Song of the South). The stories of the comics involve the wise Brer Rabbit outwitting his forest foes. However, the Sunday from March 6th, 1949, the scan of whose British re-formatted reprint from Mickey Mouse comics magazine no. 508 (dated Jan. 7th, 1950) is above, is interesting because it depicts a different resolution than usual (click on the image to view it in larger size).
Between 1945-48, the Brer Rabbit Sunday comics featured short continuities which would last a few weeks. Beginning with 1949, a gag-a-week format was adopted. The Sunday covered in this post is one of the first such Sundays and has not been reprinted in the US, as most of Brer Rabbit Sundays.
Posted by Kaya Özkaracalar at 11:40 No comments: 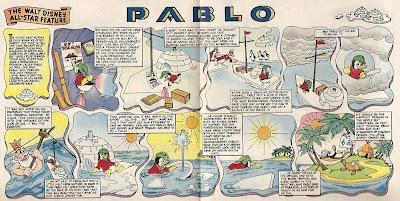 Above scan is from the color central pages of the no. 482 (dated Jan. 8th, 1949) of Britain's Mickey Mouse comics magazine, featuring a British-made comics adaptation of an episode of the feature-length live-action/animation hyrid Disney movie Three Caballeros (1944). The movie had already been adapted into comics with a one-shot comics book in the US in 1945 and this segment had taken 8+ pages of that 48 pages long comics. The short British-adaptation in Mickey Mouse is the first stand-alone appearance of Pablo the Penguin. Later in 1949, he would co-star with Dumbo the Flying Elephant in a Xmas special comics from the US. Following another stand-alone adaptation in a Silly Symphony comics book from 1954, Pablo would sink into oblivion until Brazilian Disney comics artists revived him for a short-lived series in 1995. He has not been seen since than.
The same issue of Mickey Mouse which had the Pablo comics strip also featured the below apparently British-made ice-related single-strip illustration at the bottom of its back cover:

Posted by Kaya Özkaracalar at 15:44 No comments:

To celebrate Turkish national basketball team's amazing 83-82 win over Serbia in the last seconds of the semi-finals of the world basketball championship tonight, I present a scan (taken from the outducks archive) of the Donald Duck daily strip from Aug. 8th, 1942, which appears to be the earliest basketball themed Disney comics strip according to the inducks index.
Posted by Kaya Özkaracalar at 14:12 No comments:

Above scan from the no. 70 (dated April 29th, 1944) of Turkish children's weekly Çocuk Haftası [Children's Week], which had been serializing an illustrated text story of Bambi, is of a notice, perhaps an 'advertorial'!, urging its readers not to miss the movie itself which had opened in Istanbul's Sümer cinema. The one-and-a-half year delay for the Turkish release of Bambi (which had premiered in the US in August 1942) is quite normal given the wartime conditions.
The Sümer cinema, which had opened in 1930 as Artistik, would be renamed in the later decades as Rüya and then function as a venue for mostly B-movies. Further later, it would become an adults-only theater (*). A long way from Bambi!..

(*) On Dec. 27th, 2008, Rüya was raided by Turkish police's vice squad for being a site of gay prostitution. Next month, it was renamed as Yeni [New] Rüya and converted back into mainstream programming, eventually even hosting the Istanbul Film Festival. However, it closed its curtains for good on May 7th, 2010.
Posted by Kaya Özkaracalar at 00:01 No comments:

PINOCCHIO ON THE COVERS OF BRITAIN'S MICKEY MOUSE WEEKLY IN 1940 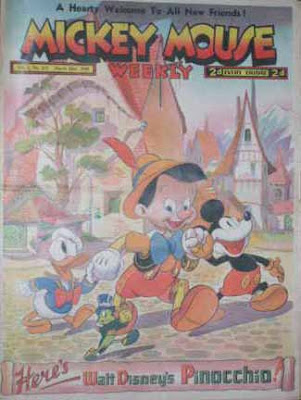 While Pinocchio had made its British debut on the cover of Mickey Mouse Xmas Special published in late 1939, the puppet-boy made its first appearance on the covers of the regular Mickey Mouse Weekly with no. 217 (dated March 30th, 1940) which marked the start of the reformatted serialization of the US 'Pinocchio' Sunday newspaper comics in this British magazine. The artwork of the cover was by Victor Ibbetson who had been on the staff of MMW since its early days in 1936 and was responsible for several covers after the main cover artist Wilfred Haughton left circa 1939 (Prior to his employment in MMW, he had worked in animated short cartoons by Roland Davies based on Davies' newspaper strip 'Come On, Steve'.) As can be seen in the above scan, Ibbetson's rendition of Mickey Mouse is rather substandard, not to mention the awkwardness in the sizes of the featured characters.
On the other hand, the below cover from no. 226 (June 1st, 1940), whose artist is unknown, is quite good-looking in terms of art, and the design, with the panels of the featured Donald Duck strip pasted on the fish bowl, is imaginative. 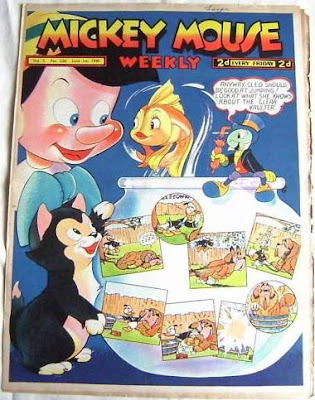 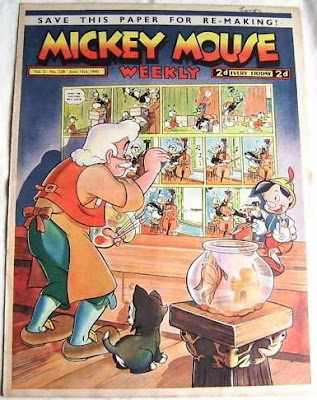 In my opinion, this is one of the most creative MMW covers ever with the very meaningful integration of the featured strip into the main illustration. The artist is again unknown, but I suspect Basil Reynolds' hand as he is known to have made similar cover works, with diegetic integration of strips into his own art, in post-war MMW issues.
The below cover of no. 235 (Aug. 3rd, 1940), on the other hand, is average and might again be the work of Ibbetson: 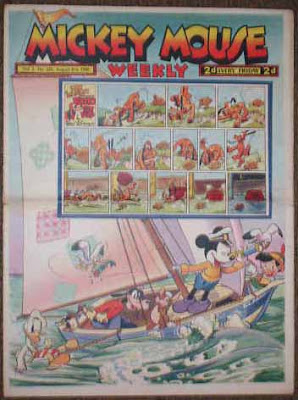 By the end of October 1940, both Reynolds and Ibbetson would be drafted for the 2d World War and the British art chores of MMW would be handed over to Ernest Richardson, the younger brother of Charles Richardson, a collaborator of Ibbetson from his animation days.
The info on the backgrounds of the artists is derived from Basil Reynolds' memoirs, which were kindly made accessable to me by John Wigmans.
Posted by Kaya Özkaracalar at 00:01 No comments: