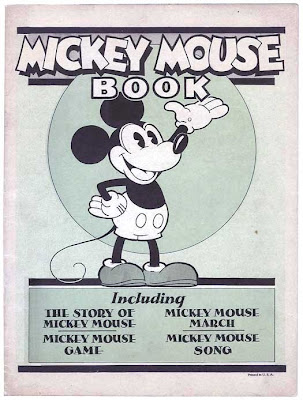 The first print appearance of Mickey Mouse (naturally besides posters and other publicity material of cartoons themselves) was with the daily newspaper strips which began in early 193o (An excellent web site covering to the earliest Mickey strips is at http://bobcat74.free.fr/mmds/plane/pln001.htm). The first publication exclusively devoted to Mickey on the other hand was the Mickey Mouse Book published later the same year. Vintage Disneyana collectibles expert David Lesjak's highly recommended blog had already covered this book in a post last year (http://vintagedisneymemorabilia.blogspot.com/2007/12/mickey-mouse-book.html), but I want to go over it again with a bit of additional detail and this time provide a complete run of scans. According to the collectors' guide Disneyana, this slim booklet was distributed to dimestores and often utilized as a give-away with toys; David says it was distributed to theaters to be used as a promotional item for the newly-founded Mickey Mouse Clubs.
The contents are a 4-page illustrated story, several games and songs, as well as a few full-page illustrations. 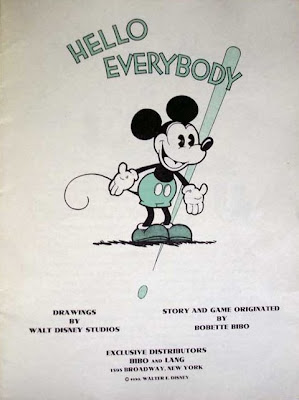 The main feature of the book, the four-page story, is credited to Bobette Bibo, the publisher's 11-year old child. It is a simple but very interesting story involving Mickey's debut. It starts in "mouse fairyland" where a mischief-making mouse, named simply as "mouse 13" is expelled because of his "pranks". The mouse falls through the skies and lands in a house in Hollywood. Having found and eaten some cheese, he begins to dance on his own from joy. The resident of the house happens to be Walt Disney and, having observed the little mouse dancing and doing tricks, says, "You give me an idea for a series of comedies. I have an idea that I can make you a picture star." And, as we all know, he does make good of his word. Mickey is still said to live in the same house with WD, in a hole!, even though he has a habit of sneaking into WD's bed at night and sleeping with him... 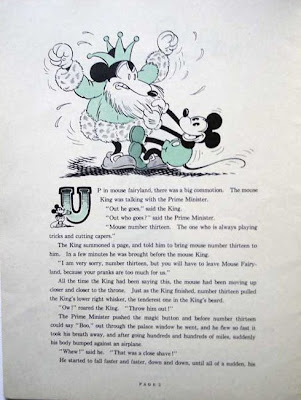 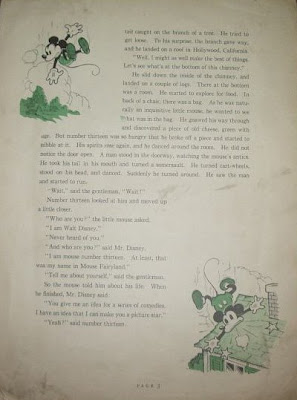 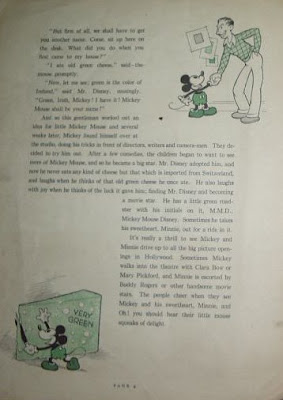 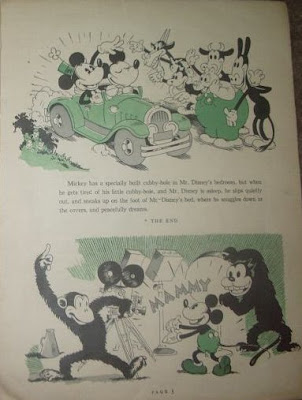 This story of Walt Disney's encounter with a little mouse in his house might have been an inspiration for Disney when he made up the highly popularized account that his inspiration for Mickey was a real mouse in his studio (see below post).
And below are the scans of the next four pages, all game-related: 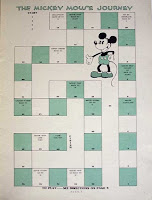 Page 10 is a nice full-page illustration: 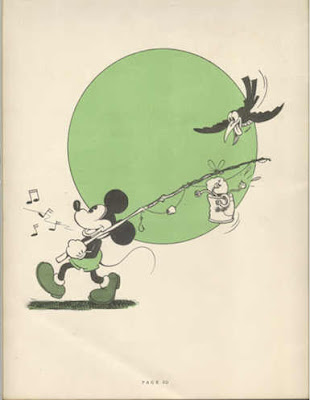 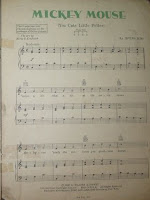 except for the last page, which once again features a full-page illustration: 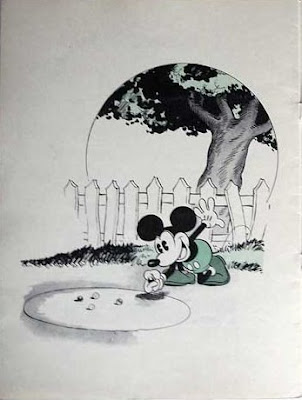 The reverse of the back cover is blank, but the back cover itself features the below illustration, which is nice in the sense it features a bunch of characters but perhaps a bit irratingly pretentious in its effort to be too much merry-looking (at least for my taste): 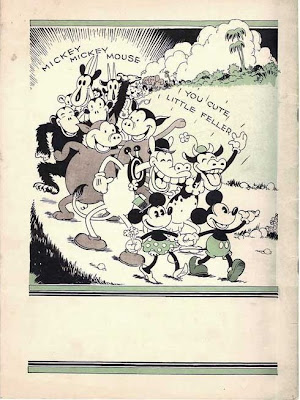 Disneyana guide claims the illustrations were drawn by Ub Iwerks, but the art doesn't really look like Iwerks' and David notes that artist Albert Barbella had submitted a bill to Disney Studio in September 1930 for his work on this publication. Here is an informative web page on Barbella: http://www.hulapages.com/barbelle.htm
Subsequent editions of Mickey Mouse Book entailed some revisions. While the cover of the first edition had a light green background, later editions had a darker green tone. The age of Bobetto Bibo was added to the title-credits page. Two samples from the Mickey newspaper strips were added to page 8 and to the backcover. Last but not least, the lyrics of the song were re-written to censor the lines "When little Minnie's pursued by a big bad villain - We feel so bad then we're so glad when you up and kill".
Posted by Kaya Özkaracalar at 11:31

Thanks for showing these photos. It is very interesting to see these pages - but it seems that the last page of the song is missing!

Nice to have so many scans. Unfortunately, you give the impression that this is the complete book, but it is 20 pages long and you did not provide scans of all pages.